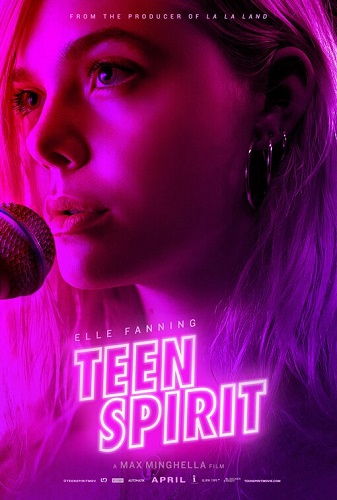 Teen Spirit has a captivating lead surrounded by underdeveloped fragments of a standard a-star-is-born template, resulting into a flat forgettable picture that a couple of bops and earnest performances can’t save.

Violet is a shy teenager who dreams of escaping her small town and pursuing her passion to sing. With the help of an unlikely mentor, she enters a local singing competition that will test her integrity, talent and ambition. 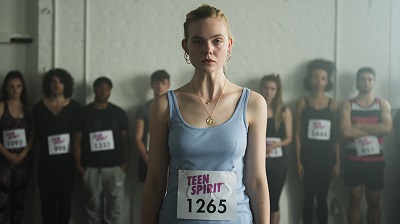 A couple of years ago Elle Fanning starred in Neon Demon. In typical Nicolas Winding Refn fashion, the movie is a series of neon-lit tableau with a gory conclusion. It’s about an aspiring model who enters the fashion industry and becomes – literally and figuratively – fresh meat.

Teen Spirit is similar and far less pretentious and self-indulgent.

Fanning plays an aspiring singer and joins a singing competition. She’s thrust into another dog eat dog world – show business. The movie is also a neon-drenched fever dream in which the lights also turn off when Violet performs, save for flashes of color.

You can see earnest performances from its cast and Elle Fanning is captivating.

Unfortunately the rest of the movie doesn’t live up to the ambition of its lead. As a matter of fact, everything here is underdeveloped. The script compensates with montages that only highlights its shortcomings. For example, she’s shown hugging a horse, then later on its sold by her mum without her consent. We know little about her relationship with the animal that this supposed dramatic moment is unearned.

This incompleteness permeates throughout the film. We know little about her relationship with her mom. We’re told that she has no social life but can go to parties and spends the rest of the night on her own. Her daddy issues mirrors the past of her mentor but we know little about Vlad. It’s interesting to see how a classically trained opera singer would help a potential pop star, but this too is reduced into a montage.

It doesn’t help that her journey towards stardom doesn’t make any effort to stray away from its a star-is-born-template. There’s an interesting twist here about power plays behind corny singing competitions that could’ve injected some life into the plot, but Rebecca Hall goes underutilized.

In the end, what you have is a staid crowd-pleasing story that’s easily dwarfed by its better made peers – Her Smell and A Star is Born.