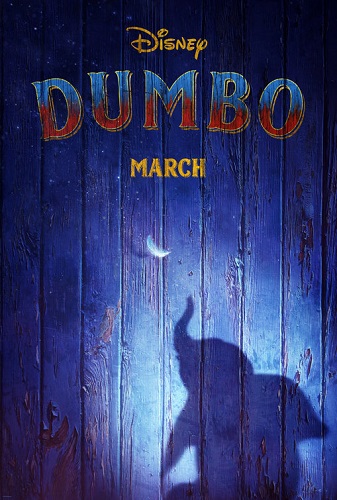 The live-action remake of Dumbo is a cash grab about run-the-mill human greed, transforming a charming tale of a flying elephant into a hollow spectacle and a dark parable about its corporate overseer.

Circus owner Max Medici enlists former star Holt Farrier and his children Milly and Joe to care for a newborn elephant whose oversized ears make him a laughingstock in an already struggling circus. But when they discover that Dumbo can fly, the circus makes an incredible comeback, attracting persuasive entrepreneur V.A. Vandevere who recruits the peculiar pachyderm for his newest, larger-than-life entertainment venture, Dreamland. Dumbo soars to new heights alongside a charming and spectacular aerial artist, Colette Marchant, until Holt learns that beneath its shiny veneer, Dreamland is full of dark secrets. [Walt Disney Pictures] 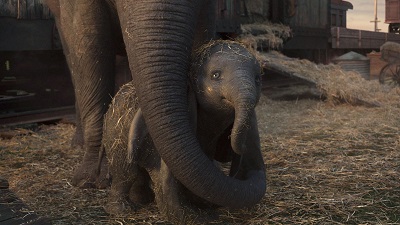 In its attempt to introduce its classics to a new generation of children but with the real intent of hemorrhaging money out of their parents using nostalgia, The House of Mouse is combing through its archives to remake its well-known properties. Dumbo is the latest of this corporate initiative.

Dumbo, a story about a misfit in a circus, is naturally directed by Tim Burton. The setting fits his gothic kid fantasy oeuvre. The detailed costume design is mixed with post-WW1 period details, carnival inspired visuals and garish art deco. While this gives you a spectacle to look at, it becomes evident early on that this is a hollow spectacle. Whatever this remake shares with the original stops once the CGI dumbo is revealed.

By the movie summary alone it’s clear that this Dumbo isn’t about Dumbo. Gone is the surreal coming-of-age tale of a flying elephant along with the subtle themes of discrimination, prejudice, isolation, and loneliness.

What you get is the classic tale of old fashioned capitalism and human greed, filled with Burtonesque caricatures leftover from Alice in Wonderland. The Medici Circus, on its last legs, is bought by a tycoon and incorporated into his own theme park – Dreamland.

Sounds familiar? The live-action remake of Dumbo is more of a subversive swipe at Disney, showcasing how its a bad idea to get bought by a conglomerate. Vandevere is an ascot-wearing caricature of Walt Disney, whose Disneyland rip-off showcases a rebranded IP (at some point he sells Dumbo stuff toys). Later on, Dumbo finds his mom as a jungle exhibit after being shipped from a previous merger. At the same time, you get the typical corporate drills – lay-offs due to redundancies, a megalomaniac president, and the shareholder cutting his losses behind the scenes.

In this movie, The Farrier family eventually lives happily ever after and Vandevere gets his comeuppance. Dumbo and his mom are finally free. But we all know that the original foretold a more accurate ending – Dumbo becomes rich and famous with the help of a mouse, and his mom gets a better position at the circus hierarchy.

Whether this remake is a timely parable of Disney that Burton leaned into or the material organically made it that way and Burton unwittingly manifested it is up for debate. What’s clear is that Dumbo is a cash grab that’s interesting for the wrong yet ironically right reasons.