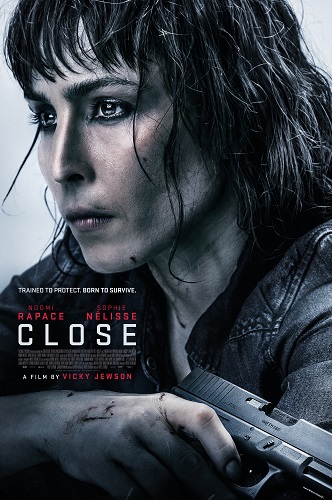 Close is a tediously predictable and dull action thriller whose only redeeming quality is weighed down by a low production value and dead-on-arrival script.

Sam, a counter-terrorist expert used to war zones, takes on the job of protecting Zoe, a young and rich heiress. But a violent attempted kidnapping forces the two to go on the run. Now they’ve got to take some lives – or lose theirs. 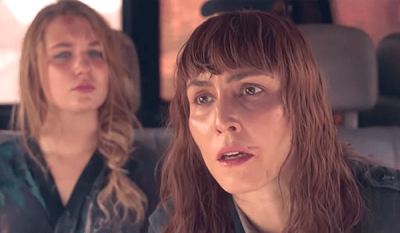 Noomi Rapace deserves to be in the roster of kickass female action stars including Sigourney Weaver, Linda Hamilton, and Michelle Yeoh but for some reason, she’s been getting featured into mediocre action movies since Prometheus.

Close is your typical popcorn movie with an ultra-generic premise. A bodyguard takes a job to protect an heiress and a kidnapping attempt forces them to go on the run. In the background, there is some shady deal going on that may or may not have a connection with this scheme involving mercenaries and corrupt cops.

In fairness, the movie aims to offer brainless entertainment so you already know what to expect going in. Unfortunately, Close has minute redeeming qualities that qualify it as sleepover entertainment.

That’s Noomi Rapace, who spends all of her time fighting the real enemies of this movie – cheap production, lifeless script, and mannequin acting from a Sophie Nélisse.

The movie lacks breadth and scope. Within its repeatedly used sets are workmanlike action scenes in dire need of a fight choreographer – the female leads get smacked around until they get the better of standard-issue POC henchmen.

It doesn’t help that the director can’t build momentum from one plot point to another.  Characters suddenly go dumb instead. The movie tries to wring out every emotion out of its quieter moments and conjure some drama out of its leads. But with barely written characters and zero chemistry, it’s clear that Rapace efforts are not enough.

Towards the end is a plot twist, but by this point, you’ve probably already dozed off and it makes little sense anyway even if you hadn’t. So the ending is as equally uninteresting as the beginning that you’ll probably feel like you’ve wasted an hour of your life unless that was the goal in the first place.

Close is like one of those direct-to-DVD titles that easily get pirated and peddled by bootleggers before streaming became widespread. It’s a shame because we’ve seen that Rapace can carry an action movie, the movie she’s in just keeps failing her.