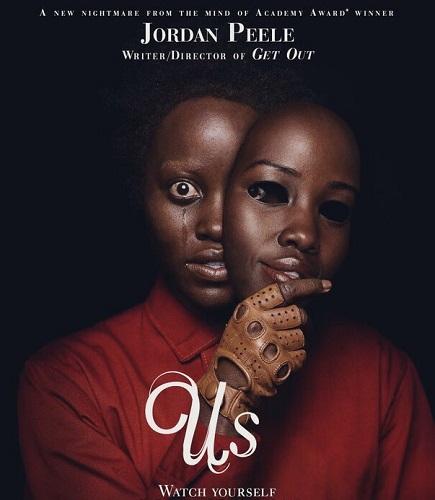 Blessed with a director capable of combining political allegories with popcorn thrills, Us is an entertaining blend of horror and comedy about duality with story-driven visuals and great performances.

A mother and a father take their kids for an idyllic summer getaway. After spending a tense beach day with their friends, the Tylers, Adelaide and her family return to their vacation home. When darkness falls, the Wilsons discover the silhouette of four figures holding hands as they stand in the driveway. Us pits an endearing American family against a terrifying and uncanny opponent: doppelgängers of themselves. 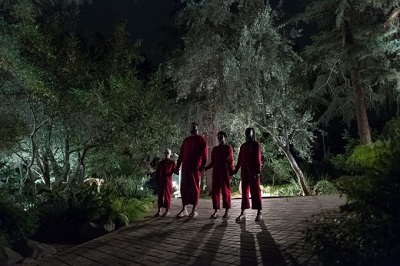 The golden rule in writing has always been it’s not what you say, it’s how you say it. All stories have already been told and even if doesn’t exist yet, there’s always Rule 34.

Us is an inventive genre movie. There’s a mix of genre staples and tropes visualized in interesting ways. Familiar elements such as a pair of twins, a mirror maze, a home invasion, and that supposedly “empty” secret place underneath your feet become intriguing. The red and blue imagery, wise use of shadow and lighting, nifty details that need a second viewing, and a ritualistic choir musical score help in setting a mood and atmosphere.

At the same time, the script manages to deftly juggle comedy and horror that which character you root for, reflects something about you as a viewer. Lupita Nyong’o does such a great job here that you’ll feel like watching two shades of one color. The rest of the cast is great too, and the younger actors hold their own.

Us has something to say, filtered through a classic horror theme of duality.

It gets messy in the second half, as it tries to tie its inventive scares to a grand statement about, well, Us and I presume America. It doesn’t quite know exactly what to say – it strains to connect its observations about human nature, a broad commentary about what this means for today’s society, and the kind of environment it creates.

But it is clear that Us reveals a universal truth proved by a timely string of events. The recently released documentary of Micheal Jackson, the revelations of the #MeToo Movement, the expose’ on sexual abuse in Hollywood, and the resurgence of extreme right-wing groups in America all remind us that people can still be fucked up no matter how good they are to certain people and how good they are at what they do. Just because its hidden in plain sight or you choose to hide it, its safely tucked away to be forgotten.

What do you do when your assholery catches up to you? Do we create our own legacy and steer our destiny or is legacy created outside of ourselves and we have no control over fate? What happens when all of these compounds into one single event and realize we are exactly what we deny ourselves to be?

Us raises all these questions that will incite discussions in Film Twitter for a few weeks. While it doesn’t quite stick its landing, it still does make you wonder about the shifting moral compass of human beings. You are your own undoing and the uncomfortable truth that you may not even be able to stop yourself.