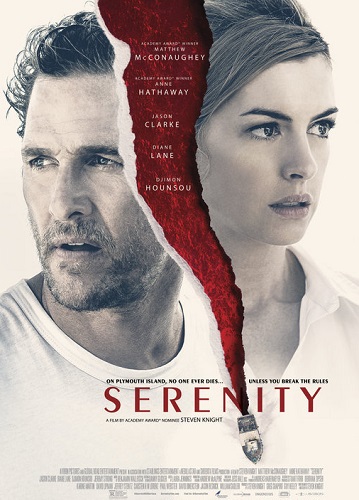 Serenity is the unintentionally hilarious movie of the year as an over-the-top yet generic neo-noir with a terribly confused script, hammy acting, and cheesy sentimentality.

Baker Dill (Matthew McConaughey) is a fishing boat captain leading tours off a tranquil, tropical enclave called Plymouth Island. His quiet life is shattered, however, when his ex-wife Karen (Anne Hathaway) tracks him down with a desperate plea for help. Her appearance thrusts Dill back into a life he’d tried to forget, and as he struggles between right and wrong, his world is plunged into a new reality that may not be all that it seems. 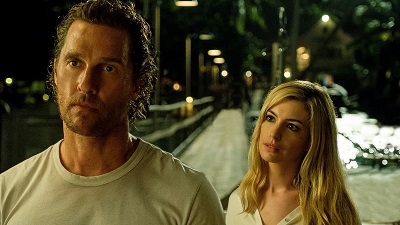 Awful movies are usually dumped in January and February, but I was curious enough to watch this without reading any of the reviews.

There are inept confusing movies because of behind the scenes reasons that we may never exactly know (see: The Snowman, Predator) and there are inept silly movies done with a straight face (The Bird Box, Velvet Buzzsaw).

Serenity is the latter, which is essentially a twist searching for a movie.

The premise is coherent enough – a gruff anti-hero gets propositioned by his femme fatale ex-wife to kill her sadistic husband and save their shut-in computer-obsessed child. As the movie progresses with butt shots and a wet rambling McConaughey, things get over-the-top on top of its heavy-handed cliches.

Instead of fleshing out a world that is supposedly about nothing is what it seems, the first half of the movie spends its time on Baker Dill. He is a manly man’s Hemingway fantasy – a former soldier turned gruff fishing captain with a lifelong mission to catch an elusive fish named Justice. He goes straight out of bed after sex to put his clothes back on – no underwear of course – and immediately leaves, but after he gets money from a casual hookup to fund this obsession.

This sad macho cycle that’s the stuff of trashy B-movies is interrupted by his ex-wife, who saunters into the only bar in town. She’s played by platinum blonde Anne Hathaway whose make-up seems to be done by a spatula. She makes a proposition and Dill is sucked into a plan involving an uber-villain named Frank. At some point this gangster prowls the harbor to fuck underage girls in the ass for 10 bucks (one of the other cringey pedophilia joke in this movie).

These cartoonish characters – including a magical negro played by Djimon Hounsou – are injected into a confused and half-baked second half. It piles on ideas that it barely invested in, jumps over plot holes, and hammers down on a poor man’s Black Mirror plot twist. All of this is executed with a self-seriousness of a high concept thriller that in reality plays out as a silly and contrived denouement.

As a result, Serenity is a misguided over-plotted movie that has a dull mystery, cheesy unearned sentimentality, and criminally underused Dianne Lane. Steven Knight believes he’s pulling the rug underneath the audience, when viewers don’t have anything solid to stand on in the first place. Serenity thinks it’s smart, when in reality its a generic thriller that has mistaken complexity with hammy storytelling.

In case you want to know how ridiculous this movie is – Dill pulls out before his wife orgasms and says “I won”.