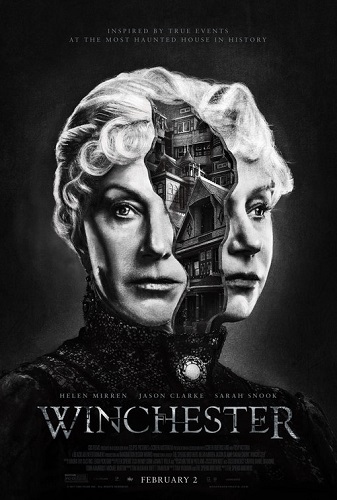 Winchester is an unremarkable horror movie devoid of any shred of entertainment, made worse by the fact that it wasted an intriguing character, a perfect setting and a great actress to deliver tiresome jumpscares and moth-eaten B-movie tactics.

On an isolated stretch of land 50 miles outside of San Francisco sits the most haunted house in the world. Built by Sarah Winchester, (Helen Mirren) heiress to the Winchester fortune, it is a house that knows no end. She is building a prison, an asylum for hundreds of vengeful ghosts, and the most terrifying among them have a score to settle with the Winchesters. 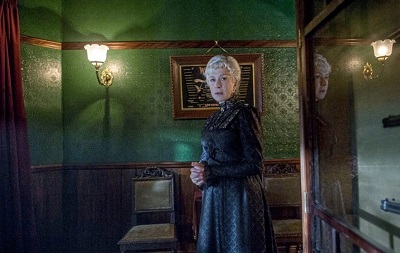 If you’ve been ever intrigued by Sarah Winchester and the house she built this is not the movie for you.

Winchester is a classic case of when bad scripts happen to good stories and talented actors.

Here, a doctor is sent to “asses” Sarah Winchester to check if she’s mentally stable enough to run the company. Dr. Eric Price is reluctant, but his employer is willing to pay double to cover his surmounting debt.

So right off the bat this isn’t about Sarah Winchester. When she’s introduced, its a Wikipedia entry of what we’ve been told – bitch is creepy. Building upon urban legend, Sara is building a prison for vengeful spirits of people killed by the Winchester rifle. Eventually though, she’s used as a vehicle for a depressed drug-addicted doctor to redeem himself.

The quality of horror scenes in this movie is hinted at in the beginning. Price, high as fuck, sees blood dripping on the painting. When he arrives at the house, more schlock horror is delivered with no creativity nor personality whatsoever. A kid – of course – wakes up in the middle of the night and stands at the hallway with a sack over his head. This Orphanage rip-off goes on predictably – after being revealed as a fake out, he points to a flight of stairs leading to nowhere and hints at the big bad. This scene summarizes what Winchester can offer – tired and perfunctory.

As a result, the movie is devoid of tension, suspense, mystery, and honest scares. The overqualified cast – Helen Mirren, Jason Clarke, and Sarah Snook – can’t save it either as they’re stuck with stereotypical characters. They all deserved better, but I totally understand if this was a paycheck gig.

The movie finishes with low budget effects and locking up ghosts with bolted doors.

But these below average offerings is not Winchester’s biggest sin. The movie’s writers and directors turned what could have been an interesting story about a millionaire Widow into a poor man’s version of The Woman in Black. There’s obviously better ways this movie can go.

Winchester could have been a psychological horror movie about a hapless woman whose life is accompanied with so much tragedy that you’re not sure whether she’s going crazy or she’s unfairly being persecuted by karma. Winchester could also have been about a misunderstood widow who used her fortune and architecture as a way to deal with grief. And simply, it could have been an old ghost story done well.

But this Winchester is done by three clueless dudes who opted to tell a white guy’s run-in-the-mill tale about loss and grief.

The Widow and The Winchester, an episode from the Criminal podcast, told a far more interesting story in 22 minutes and 25 seconds.