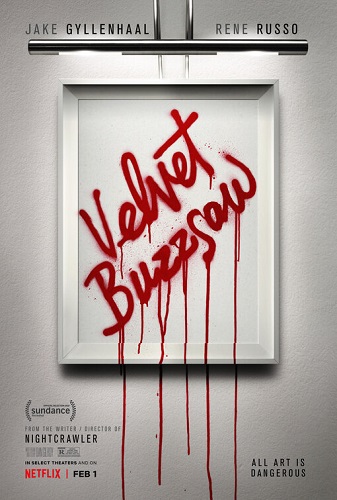 Velvet Buzzsaw is as pretty, superficial, and confounding as the world it mocks, held back by a muddled and meandering script that’s tries to be smart but ends up being silly.

After a series of paintings by an unknown artist are discovered, a supernatural force enacts revenge on those who have allowed their greed to get in the way of art. 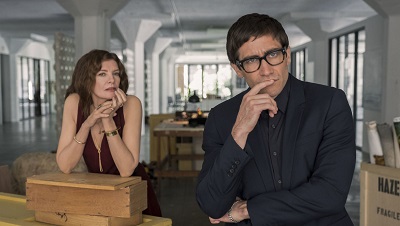 Much has been said about how pretentious modern art can be. You can string up feminine napkins and pile candies in a corner and it becomes a piece. Naturally, it lends itself up for mockery.  Dan Gilroy attempts to make his own statement about art snobbery.

He teams up with Gyllenhaal again who plays Morf, a cynical critic whom I can relate with a bit, even though the actor’s affectations remind me of a committed but cringey performance from Okja. Dan Gilroy has made some impressionable work with the Nightcrawler enabling him to fill Velvet Buzzsaw with other great actors.  Their performances are one half of the reason why this movie is tolerable.

The other half is the technical aspects of the film – production design and cinematography. The worldbuilding here – complete with the mandatory secluded Neomodern house – paint a pretty, expensive yet fragile world with arbiters of taste that are actually just profiteers. Vivid colors make for some interesting compositions, even when the movie switches tones.

Velvet Buzzsaw is amusingly pretentious at first but then goes nowhere, straining for something relevant to say.

The script is too busy lampooning its characters that there is no one to anchor the story. You expect it to be Morf, a bisexual critic oozing of self-importance with quips like, “I’m not your mouthpiece!” with no irony. But then the tone switches triggered by Josephina, a receptionist whose always late for everything and discovers a pile of groundbreaking art work.

It doesn’t matter because the script goes off in different tangents. As a result, it has no motivation, resolve nor conviction. There’s a satire here about the commodification of art, but that gets lost in a B-movie horror about how art consumes you.

When you scrub away all the aesthetic and pretty cast, what you get is a Final Destination with Tales from the Crypt horror. The movie sets-up its players in the first half, then kills them off in B-movie set pieces including a creepy 2000-ish robot, paintings that move, and spontaneous combustion (its all in the trailers by the way). For a pretty film that has detailed visuals, it’s disappointing that the horror scenes are PG-13 forgettable.

In the end, you get a pretty movie that tries to be smart but ends up being silly.

Velvet Buzzsaw is The Square with no fangs.