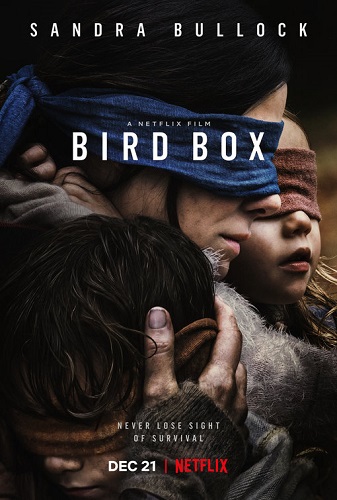 Bird Box is a disappointingly average kooky post-apocalyptic thriller that’s more content on wringing a good performance from its lead than building a better story around its protagonist.

When a mysterious force decimates the population, only one thing is certain — if you see it, you die. The survivors must now avoid coming face to face with an entity that takes the form of their worst fears. Searching for hope and a new beginning, a woman and her children embark on a dangerous journey through the woods and down a river to find the one place that may offer sanctuary. To make it, they’ll have to cover their eyes from the evil that chases them — and complete the trip blindfolded. 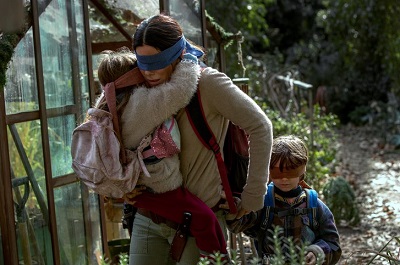 Like a joke that needs an ounce of truth to be funny, you need a bit of plausibility to suspend disbelief. This is one of the biggest mistakes in post-apocalyptic thrillers and those who don’t learn are doomed from the beginning.

Bird Box looks intriguing but as the movie goes on, you’re going to immediately notice something – it’s a slightly improved version of The Happening and still mediocre.

Here, a woman has to cross the river with girl and boy while in a blindfold for 2 (?) days. The movie dive bombs downhill from there as the rest of its ideas are silly twists combined with plot convenience.

The Big Bad is barely a monster who projects your fears that are so terrible you violently commit suicide. It’s minions are psych patients whose insanity made them immune and violent, but incapable of ambushing people walking around blindfolded.

The movie safely navigates its twists and turns. As much as I don’t want to see a couple of kids drown, surely there must be something else exciting to make them do rather than get interrupted by flashbacks.

And these flashbacks aren’t much too. Convincing yourself that a couple and two kids manage to raid houses in blindfolds while an omniscient Big Bad and its pack of zealots cruise the streets is a tall order.  And when you drink it up, the script doesn’t raise the stakes enough and leans on its cast to sell its cliched melodrama. The overqualified actors do well enough to make you see this movie, but you’ll end up getting disappointed.

There’s something here about having no choice  but to live life in the dark. There’s something about the power of fear and loss. But Bird Box isn’t clever nor creative enough to be more than just a tolerable version of The Happening with Sandra Bullock.

Bird Box is adapted from a book and people are erroneously calling it A Quiet Place rip-off (which is also a rip-off of a book called The Silence). Whether you’re reviewing it as a standalone movie or book adaptation, it doesn’t work either way.