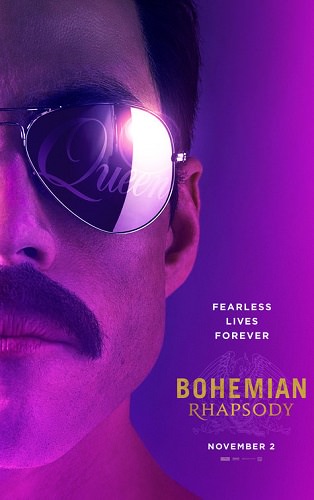 Bohemian Rhapsody is a middling celebration on either fronts – a superficial highlight reel of Queen and sanitized biopic of Freddie Mercury – all crammed into a rote music biopic that is a disservice to the extraordinary man at its center.

Bohemian Rhapsody is a celebration of Queen, their music and their extraordinary lead singer Freddie Mercury. 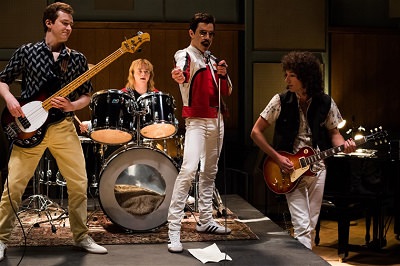 Brian May, one of the producers of the film, is intent on protecting the legacy of Queen. This impacted the movie for the better and for the worse.

Bohemian Rhapsody provides a highlight reel of the band’s success while chronicling the rise and fall of their lead singer. It’s entertaining enough for casual fans and moviegoers who know their popular songs. When you have one of the most iconic bands of all time and a legendary lead singer, it’s not hard to pluck the best stories from their history.

Rami Malek doesn’t disappoint that even when he’s lipsyncing all throughout this movie, his scenes remain engaging. With minimal makeover, it doesn’t take much to convince the audience that this is Freddy Mercury. The rest of the cast doesn’t disappoint.

Right from the beginning it’s clear though, that this movie has no intentions of letting the audience get to know Queen and Freddy Mercury beyond the surface.

Bohemian Rhapsody marches to the beat of a paint-by-the-numbers biopic.  In one scene, John Deacon plays the iconic riff of Under Pressure to break up a fight among the band. While this is understandable, as the movie promises to be a celebration rather than a documentary, the plot whizzes through the band’s turning points like a Wikipedia entry that whatever detail is lost.

Worse, Freddy Mercury’s sanitized biopic becomes a backdrop to this rote proceedings to inject a misguided redemption story. Once he embraces his homosexuality his life spirals out of control, only to be saved by a previous heterosexual relationship.

The result is a confused hybrid of a smooth over Queen biopic and a sanitized version of Freddy Mercury’s life. It’s understandable why the band wants to protect their legacy, but in doing so, dilutes a fascinating story at its core. Let’s be real here, no one cares really cares about Queen, what they really came to watch is Freddy Mercury.

In fairness, this glossy biopic is an electrifying celebration. Malek hits every move that you can tell his performance is both in reverence and respect.

Bohemian Rhapsody is a medley of the band’s chart topping hits rather than a evocative compilation that matches its larger-than-life lead singer.  It does what it supposed to, but you can’t help but think that a title of a groundbreaking song deserves to be attached to a movie that’s as fascinating and complex as its creator.