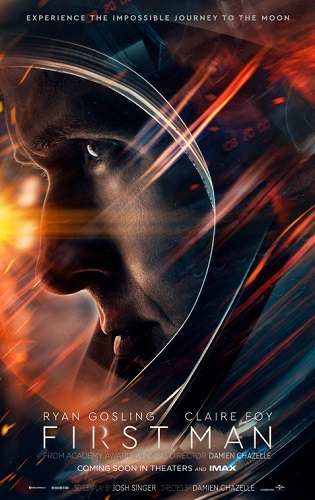 First Man peels off the romanticism of space exploration to create a personal focus on the Space Race, delivering a well-executed albeit cold journey to the moon thanks to great performances and meticulous imagery.

First Man is the riveting story of NASA’s mission to land a man on the moon, focusing on Neil Armstrong and the years 1961-1969. A visceral, first-person account, based on the book by James R. Hansen, the movie will explore the sacrifices and the cost-on Armstrong and on the nation-of one of the most dangerous missions in history. 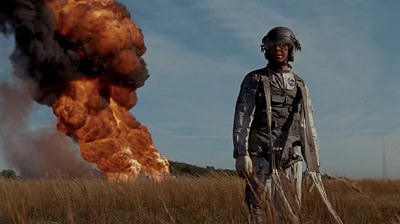 The universe has endlessly intrigued mankind that stories about outer space is expected to be either epic, deep or both.

First Man is none of that. This is both the film’s strength and weakness.

Movies about the Space Race are either historical dramas or crowdpleasing patriotic pieces. First Man is the former, focusing on its astronaut in command Neil Armstrong. Ryan Gosling is perfectly cast as the sensitive introverted engineer who’s more comfortable with numbers than emotions.

“There are risks, but we have every intention of coming back,” Neil says to his son in their last family conversation before going to the moon, as passive and calm as his response in a press conference some days before.

The real star of the movie is the imagery onscreen. Damien Chazelle always has some kind of visual gimmickry to dazzle critics.

Linus Sandgren has created such vivid cinematography that you see Gosling’s eyes glow in the darkness of a lunar module, yet with a bit of grain that domestic scenes look period accurate while luminous in a way that conveys how the dark void of outer space brings out the harsh yet captivating colors of objects in the universe.

Accompanied by deft compositions and detailed production design, First Man is able to convey the claustrophobic, tedious, and dangerous aspects of space exploration, back when scientists dreamed of touchscreen monitors while flicking mechanical motor switches. The story is precisely told through Armstrong’s point of view. There’s no picturesque shot of a rocket dwarfed by a majestic earth or the wide screen image of a lunar module making a soft landing on the surface of the moon. It’s three guys trying to land a hunk of metal on instinct and engineering know-how because that small window doesn’t really give much of a view.

At the same time though, this technical approach lead to a joyless and cold journey.

The Neil Armstrong in this picture remains a passive character. He’s a low-key reluctant hero that stays true to what we’ve been told about the guy in real life. Chazelle tries to channel this through the rest of a supposedly awe-inspiring film. The result is a distant and superfluous story for the average moviegoer. Chazelle constantly shakes the camera in an effort to communicate Armstrong’s state of mind, but he just comes off as a grieving dull nerd.

The surrounding underdeveloped characters doesn’t give us any clues about him either. Janet Armstrong tries, but all Claire Foy can do is glare and stare wide-eyed. Ed White is persistent, but Jason Clarke isn’t given much either. The cast at least, make do with what they have that it’s amusing how much Buzz can be a buzzkill.

Albeit the well-crafted mood and atmosphere, there’s nothing here that hasn’t been covered by The Right Stuff and Apollo 13. The movie tries to tell us something, but remains unreachable because of a closed off character.

In fairness, it is still a well-crafted film that anyone who appreciates the technical aspects of filmmaking will enjoy it. The rest of the audience looking for a pulse though, may get disappointed. When Armstrong finally takes that small step, it induces relief than inspiration.

“You’re down here and you look up and you don’t think about it too much, but space exploration changes your perception. It allows us to see things that we should have seen a long time ago,” says Neil Armstrong in a panel interview during astronaut selection for Project Gemini.

The movie tells us what Armstrong is looking at, but not what he sees.