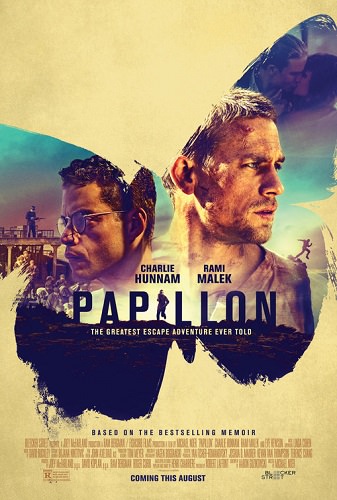 Papillion is a well acted and executed tale of survival that’s overshadowed by the fact that this remake offers no compelling reason why it needs to exist apart from catering to the millennial market.

Henri “Papillon” Charrière (Charlie Hunnam) is a safecracker from the Parisian underworld who is framed for murder and condemned to life in the notorious penal colony on Devil’s Island. Determined to regain his freedom, Papillon forms an unlikely alliance with quirky convicted counterfeiter Louis Dega (Rami Malek), who in exchange for protection, agrees to finance Papillon’s escape. 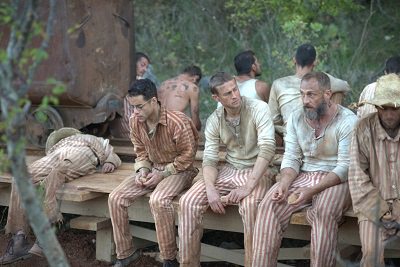 These days you have to do a bit of research just to check if a movie is a reboot or a remake.

Papillion is a remake of the Steve McQueen and Dustin Hoffman classic.  Yup, I’ve asked the same question too: Why?

For the same reason that Hollywood is making a remake of every baby boomer classic or older millennial tentpole movie – make a quick buck from viewers who were too young to remember or nostalgic for, the original.

In fairness, I’m a millennial and I don’t remember much about the original, so at least they picked a classic old enough. Papillion does benefit from the performances of its up-comers: Rami Malek and Charlie Hunnam. Each have led a beloved television series and have transitioned well into film. Malek got a career-defining role in a Freddy Mercury biopic after Sacha Baron Cohen left the project for creative differences while Hunnam is set to star in a boxing flick after surviving a flop unscathed like all other pretty white boys in Hollywood. Thinking back to the roles they’ve played, the characters are right in their wheelhouse – Malek plays Dega as the brain and Hunnam plays Papi as the brawn.

The movie is based on a highly-disputed memoir of Henri “Papillon” Charrière about his time in the Penal Colony. Production design provides handsomely staged set pieces. It’s that kind of well budgeted true to life (of sorts) period movie that could pass off as an Oscar contender with the right campaign (Oscars love their great white man in history flicks).  Even though its leads haven’t led a blockbuster nor bagged an award in their belt, Malek and Hunnam have a good dynamic here.

The question still remains though. The new casting isn’t a compelling enough of a reason for this to exist.

Malek and Hunnam gave it their all, but there’s nothing here to humanize their characters. All I see is a different kind of Elliot and Jax. Papi somehow manages to maintain a neatly trimmed haircut and beard all throughout this movie.

Their version doesn’t provide any new perspective nor more compelling moments to the typical jailbreak tale and the original. The 1973 version has a memorable two-minute scene that the 2018 version couldn’t achieve with its two hour running time.

In the end, Papillion is more of a reminder that there’s a better original version that already exists.