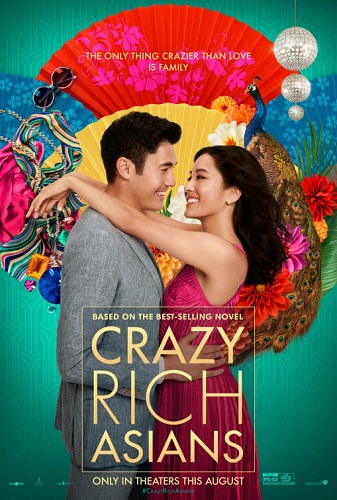 Albeit amusing, Crazy Rich Asians is too distracted by its own reflection to reveal more than a simplistic soap opera that just happens to have a high production value.

Native New Yorker Rachel Chu (Constance Wu) accompanies her longtime boyfriend Nick Young (Henry Golding) to his best friend’s wedding in Singapore. Excited about visiting Asia for the first time but nervous about meeting Nick’s family, Rachel is unprepared to learn that Nick has neglected to mention a few key details about his life. It turns out that he is not only the scion of one of the country’s wealthiest families but also one of its most sought-after bachelors. Being on Nick’s arm puts a target on Rachel’s back, with jealous socialites and, worse, Nick’s own disapproving mother (Michelle Yeoh) taking aim. And it soon becomes clear that while money can’t buy love, it can definitely complicate things. 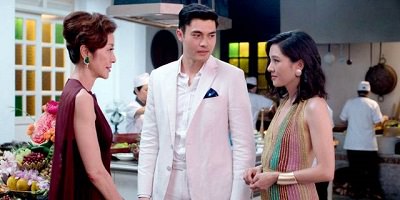 Kevin Kwan sold the rights to his book for $1 dollar to ensure that the casting isn’t whitewashed. The result is an all Asian ensemble film that escaped the clutches of Scarlett Johansson, Emma Stone, or a white blonde newly nominated Hollywood It Girl that will fictionally have a drop of Asian blood.

Crazy Rich Asians benefit from the ostentatious wealth of its world – palatial homes, luxury cars, couture clothes, expensive jewelry, and unchecked materialism. It also benefits from featuring rich attractive Asians at the center of the story that is so rare in mainstream Hollywood that the movie exudes a groundbreaking kind of novelty. It’s like watching unicorns prance around to the tune of Chinese cover versions of songs about money.

The cast is a perfect fit, with Michelle Yeoh stealing the spotlight from everyone. Henry Golding is definitely leading man material and Constance Wu deserves to be in more movies. However, Eleanor Young is one you’re most interested about. Awkwafina and Nico Santos added levity as a pair of fairy godmothers.

Unfortunately, as much as the cast do their best, the movie spends most of the time being Crazy Rich and forgetting about the Asians.

When you wipe out all the polish, what you have is a simplistic soap opera of a fairy tale romance. The cast does a good job but they’re ultimately held back by one-note characters that could’ve added more substance to an inevitably condensed story.

The script is preoccupied with boasting its location and production design than storytelling. Flying to a secluded island in a helicopter and getting an invitation to a soiree in a property that’s so exclusive its not in the GPS is a dream come true. However, they barely scratch the surface of domestic and identity issues in plain sight. The unnecessary subplot doesn’t help.

As a result, it’s hard to buy the premise that the film tries to sell. A girl with a PhD in economics doesn’t recognize the golden boy of the wealthiest real estate developer in Singapore. And the same wealthy family fail to see the value of such degree.

There’s a scene here towards the end, where Rachel plays a game of mahjong with Eleanor. Yeoh’s calibrated reaction spoke volumes about a woman tied to tradition, but she certainly didn’t get to where she is by surrendering to it. It’s a scene where game recognizes game. But this great moment is too little too late.

In fairness, the movie is still amusing. Appealing to the mainstream will provide better returns in the long run as it helps pave the way for more Asian films that isn’t about martial arts.

Crazy Rich Asians is a milestone (the all Asian cast Joy Luck Club was 25 years ago). It broke the stereotype of nerdy male Asians, MSG, and dragon-lady mothers. It has already shattered this nonsensical Hollywood notion that POC movies are box office risks. There are white people who will love it. As an Asian and a moviegoer, I just wished I was given more than just another telenovela.