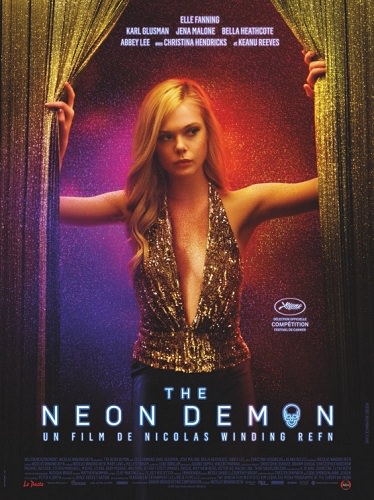 Neon Demon is a long-winded self-indulgent film about the fashion industry, no thanks to a monotonously weird over deliberate script and cut-out characters.

When aspiring model Jesse (Elle Fanning) moves to Los Angeles, her youth and vitality are devoured by a group of beauty-obsessed women who will take any means necessary to get what she has. 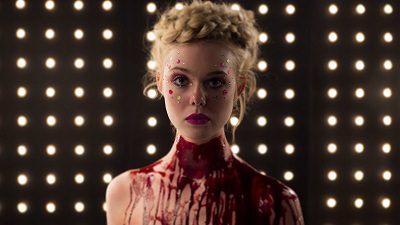 Nicolas Winding Refn has made a name for making stylish indie films with Ryan Gosling. While his movies are great to look at, they don’t really convey any deeper meaning beyond slick imagery. His true M.O. is a literal interpretation slathered with meticulously composed images. Neon Demon is no different.

Neon Demon does look interesting at least. If you’re a cinephile who appreciates technical skills in crafting imagery in filmmaking, there are a lot of moments here to pass the 2-hour running time. In fact, the entire movie is like a series of slick fashion ads inspired by – apart from Refn’s go to influences Kubrick and Lynch – Argento, Bergman and Grand Guignol (NSFW).  In one scene as Jesse makes a dramatic tumble, soft blonde tresses and rose petals fall in a specific motion as the camera takes a close up of Elle Fanning’s cherubic face. In another, lighting casts her shadow on a beating wall as she eavesdrop on her next door neighbor.

At the same time, that’s all there is to this movie. Unfortunately for those who liked Drive, this movie is from the director who made Only God Forgives sans Ryan Gosling.

There is a premise here set in the fashion industry. It’s the age old tale of an innocent who enters a cutthroat world of predators. While we all already know that models are treated as no more than objects, model castings have changed for the worse since the 90’s when supermodels were still allowed to have a personality.

But Refn is a curator of aggressively shocking referential images than a storyteller, so we’re given another hyper-stylized dreamscape that doesn’t go beyond the obvious, with cut-out characters doing some weird shit set to a synthy soundtrack. It’s a surrealist horror thriller with an anything-goes plot. So apart from all the auteur posturing there’s necrophilia, cannibalism, and kinky violence.

The cast do what they can for their disposable characters.  Elle Fanning glows, but its hard to see what she has more than anyone else, other than that the lights turn off and things go in slow motion when she’s photographed by a guy that looks like a serial killer moonlighting as a fashion photographer.  The rest are ice princesses inside mannequins.

Neon Demon ends with lust and jealousy taking a literal conclusion after a series of images designed to look cool and make you say, WTF is going on? And none of them is thought provoking nor compelling.