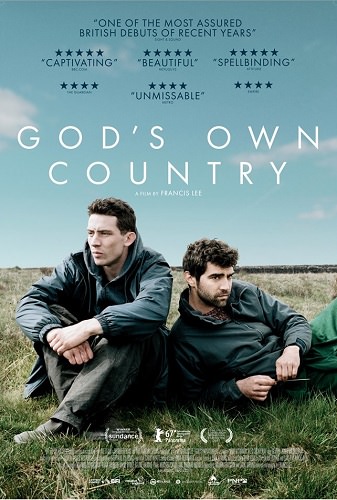 God’s Own Country is an unsentimental yet captivating gay drama thanks to a naturalistic thoughtful storytelling and great performances that turns a stark landscape into a bitter yet hopeful horizon.

Johnny Saxby (Josh O’Connor) works long hours in brutal isolation on his family’s remote farm in the north of England. He numbs the daily frustration of his lonely existence with nightly binge-drinking at the local pub and casual sex. When a handsome Romanian migrant worker (Alec Secareanu) arrives to take up temporary work on the family farm, Johnny suddenly finds himself having to deal with emotions he has never felt before. An intense relationship forms between the two which could change Johnny’s life forever. 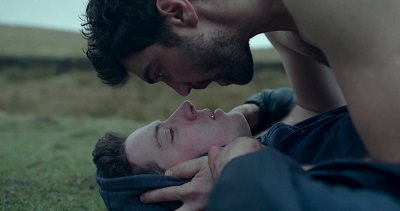 There’s something about the sprawling countryside that turn men into bedfellows. This is no Brokeback Mountain however, so anyone looking for a melodramatic love story should throw away their expectations.

God’s Own Country is the sensual debut of Francis Lee. Made by an actor turned writer-director who was born in his family’s farm, the movie gives an honest portrayal of this kind of life. People born in the city imagine acres of land with a pen filled with a fluffy herd of sheep, a rustic stable of beautiful horses, and fresh milk for breakfast. In reality it’s a muddy, gray, isolated farmland with livestock that requires unending repetitive manual labor.

This sets the tone for the rest of the movie. The scenic shots of the stark English countryside in contrast with the animal husbandry is a visual metaphor for Johnny’s family life. The Saxybys are a pragmatic hardened folk of a few words with no time for sentimentality in a life where you have to take responsibility of shooting your own calf when necessary and the son takes the place of the father. The treatment of Johnny’s sexuality is truthful too: it’s acknowledged in silence.

Francis Lee portrays a well written family dynamic that Johnny’s self-destructive habits come unsurprising and the arrival of Gheorghe a welcoming sight. If Brokeback Mountain has taught us anything, it’s that gaydars exist in the macho side of the countryside too.

The script avoids a familiar coming out drama and melodramatic dialogue. With sharp close-ups it focuses instead on minimal words that highlight what are left unsaid and tender moments of intimacy that reveal unspoken desires. Gheorge’s sensitivity eventually rub off on Johnny, whose hardened edges are softened as the two gracelessly fall in love. It’s an awkward yet earnest romance between an emotionally stunted young man and a sensitive soul.

Performances here are great all around that you root for the two lads. Josh O’ Connor is a gawky Brit that makes him an easy fit for a bumpkin, which makes for a good contrast with Alec Secareanu and his bedroom eyes. Gemma Jones and Ian Hart keeps the story grounded.

God’s Own Country excels more as a family drama with Johnny and Gheorghe’s love story as a short intense love affair. The movie is blunt with a not so romantic typical romance yet opts to choose the latter over the former.

Still, it’s an earnest look at being gay in an isolated community with ingrained norms of masculinity. In its own way, God’s Own Country is a poignant captivating movie about hope, love, change, and the courage to make all this happen in the face of a hard uncertain life.