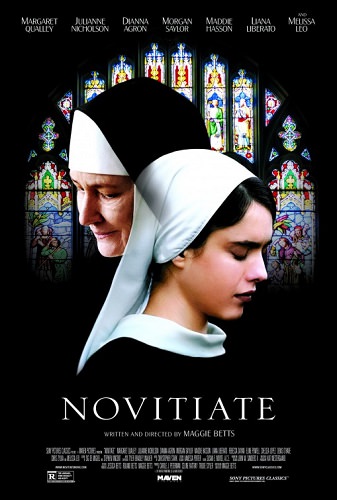 Novitiate sidelines a compelling story in favor of a conventional coming-of-age drama, turning into a mildly engaging narrative saved by great performances.

Spanning over a decade from the early 1950s through to the mid-60s, Novitiate is about a young girl’s first initiation with love, in this case with God. Raised by a non-religious, single mother in rural Tennessee, a scholarship to Catholic school soon finds Cathleen drawn into the mystery and romanticism of a life devoted to the worship and servitude of God. With the dawn of the Vatican II era, radical changes in the Church are threatening the course of nuns’ lives. As she progresses from the postulant to the novitiate stage of training, she finds her faith repeatedly confronted and challenged by the harsh, often inhumane realities of being a servant of God. Cathleen finds herself struggling with issues of faith, sexuality, and recent changes in life of the Church. [Sony Pictures Classics] 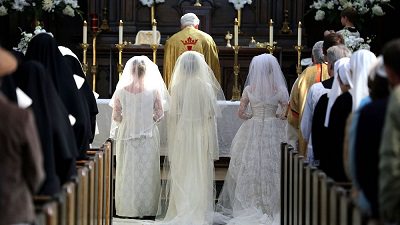 There are a number of movies about nuns but they rarely reflect reality. Still, that doesn’t mean there are filmmakers who aren’t willing to brave the ire of zealous believers.

Vatican II ushered the Catholic Church into the modern age, which of course didn’t bode well. A massive exodus of nuns followed, leaving the curious and the believers baffled. This is the backdrop of Novitiate, a coming of age story about a girl named Cathleen.

Margaret Qualley, along with the rest of the girls, are a perfect fit to their roles. Maggie Betts does a good job at capturing their innocence and confusion. Thanks to cinematographer Kat Westergaard Novitiate is a beautifully captured movie despite the stark utilitarian surroundings, giving the girls a soft glow against a cold backdrop.

This movie doesn’t demonize its characters or portray the Church in a bad light. People celebrating around a campfire isn’t solely a witch’s tradition. Novitiate shows us a glimpse of the convent life, which isn’t necessarily a bad thing to tackle. The problem is another character has a bigger story to tell.

“You might consider me the voice of God around here,” Reverend Mother says. She later on subjects the girls to hazing as she gets frustrated with the memos she receives. Through this the movie expands into a clash of ideals between adaptation and tradition. When the archbishop visits the convent to confront her about resisting Vatican II, its sweet karmic justice for the forward-thinking Sister Mary Grace who was overpowered by Reverend Mother St. Claire.

This presents some interesting questions. How much sacrifice do you need to make in a man’s world where you are silenced and the supreme law you devote yourself to follow is open to subjective interpretation? How can you really determine if a person’s motivation is pure and noble for selfless piousness?

Novitiate takes the more conventional route instead of exploring the stereotypical rigid Catholic school disciplinarian that inspired evil creepy fictional nuns. At the same time, the script doesn’t really put Cathleen through the ring of fire.

In fairness, Cathleen’s side of the story provides an interesting tale of a girl realizing and making a choice of what she really wants in life. Is she in love with Jesus or is she compensating for a deadbeat father?

“I want more,” Cathleen says in the final ceremony that will officially turn her into a Novitiate. It’s a worthwhile pursuit, but you can’t help but think that the movie opted for less.