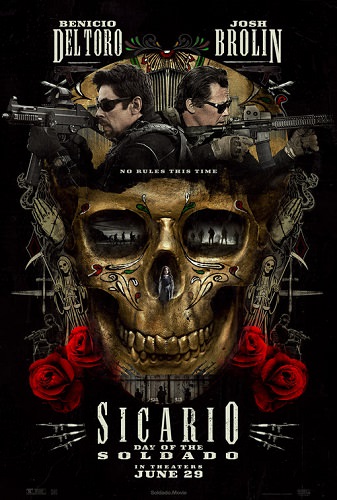 Soldado is a reductive version of its predecessor, turning the war on drugs into a serviceable yet less inventive and compelling story revolving around the US border.

In the drug war, there are no rules – and as the cartels have begun trafficking terrorists across the US border, federal agent Matt Graver (Josh Brolin) calls on the mysterious Alejandro (Benicio Del Toro), whose family was murdered by a cartel kingpin, to escalate the war in nefarious ways. Alejandro kidnaps the kingpin’s daughter to inflame the conflict – but when the girl is seen as collateral damage, her fate will come between the two men as they question everything they are fighting for. 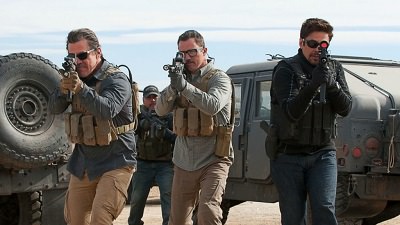 Denis Villeneuve left a big shoe to fill after directing Sicario. It doesn’t need a sequel, but the original was critically praised and well received by audiences that another one is not as unnecessary like other cash grabs.

Stefano Sollima builds upon the original, shifting the story from the war on drugs to illegal immigrants in the US border. It’s a timely topic given the Zero Tolerance Policy that further cements that Trump is moron Hitler, but this movie was written before this came about so its only a backdrop. Nonetheless, there is something worthwhile enough to watch here.

Sollima uses the same core elements from the original and keeps Soldado close to its roots. The brooding atmosphere combined with the doomsday musical score build up to intense combat action. Recurring characters Josh Brolin and Benicio del Toro are a perfect fit. Matt Graver is the kind of guy that manages to be menacing even in cargo shorts and crocs. Alejandro is the quiet and deadly type yet you still respect him for settling a score with dogged persistence.  There are new characters here that prove to be a good find.

Unfortunately, Sollima can’t create the same potency despite his efforts to follow the original. Soldado is essentially the less inventive and compelling Sicario.

Repetitive aerial shots of black vans, black hawks and head-on combat action makes you remember the original’s more memorable stark imagery and measured action sequences. It’s still watchable, but you can’t help but compare the two when a standard has been set.

Without a character like Kate, there’s no sense of humanity here. The young characters are swept along a series of predictably connected events while the leads remain unkillable. As pretentious as the original may seem, it’s able to imbue entertaining elements with a moral undercurrent.

Soldado also tries to be the thinking man’s action movie but can’t come up with any meaningful perspective to all its violence. Sicario was about the dehumanization and futility of war. Soldado is a half-hearted attempt at self-redemption and a reductive commentary on illegal immigration. It doesn’t help that the script turns in a Hollywood ending to open the movie for a possible trilogy.

Sollima does turn in a good effort here. Soldado is by no means a bad movie. Unfortunately as sequels often go, the original is simply better.