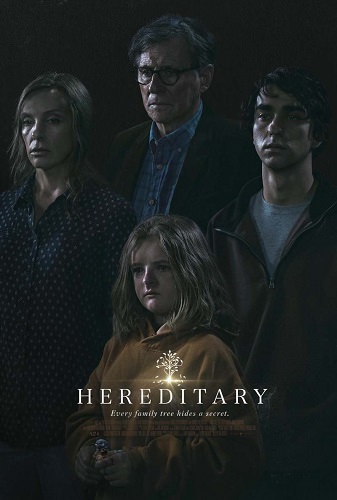 When Ellen, the matriarch of the Graham family, passes away, her daughter’s family begins to unravel cryptic and increasingly terrifying secrets about their ancestry. The more they discover, the more they find themselves trying to outrun the sinister fate they seem to have inherited. [A24] 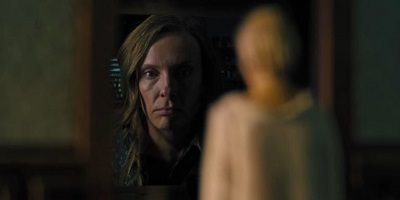 There are two kinds of horror movies these days – one grabs both sides of your head to turn it and scare you, the other makes your head turn and you scare yourself. Hereditary proves to be the latter thanks to a helluva crafty filmmaker.

The movie starts off with “The Omen” vibe, with an odd child who’s more closer to her recently deceased grandmother than her mom. Hereditary is smarter than thousands of lazily written mainstream movies that would have taken advantage of Charlie’s appearance and instead delivers a dramatic catalyst that will tell you that the hype around it is well deserved.

Ari Aster does this throughout the movie. He leverages genre filmmaking by using old school favorites – psychological horror, haunted house, the occult, possession, and ghosts. And then uses character perspective, production design, sound design, and cinematography to build a creepy atmosphere and upend whatever scare tactic we expect.

When Annie stops to catch a breather after a successful seance, a familiar sound cuts through the emotional scene and startles every person in the cinema I’m in. The windows of a tree house glows at night and sends a hellish red glint on Peter’s eyes.

Performances here are great all around that you feel sorry for Steve. Toni Collette goes from crazy to indifferent without a hitch. Alex Wolff turns from a morose weed smoking teen into a scared boy that you won’t wonder why he felt scarred making this movie. Milly Shapiro sells her role with little dialogue.

Hereditary doesn’t lose sight of building up its story, offering clues and foreshadowing without being contrived. The plot is slow, the camera haunting empty halls and making compositions out of dimly lit rooms. Lighting here is used in different ways, creating specters in the dark and announcing the presence of a spirit. The musical score add dread to an isolated house that contains a vague otherworldly malevolence that’s taking over their lives.

As we piece all the puzzles together, we learn the horrific truth – the fate of Annie’s family has already been predetermined, like a series of dioramas that had already been staged. Sleepwalking enables her to lift the veil of denial, but whatever she can do to end it all remains a nightmare. There are some close-ups here that make characters seem like vacant eyed dolls, as if we’re looking at them before they’re put in place. And maybe they are, as they play roles that’s already been decided even before the matriarch died.

When the big bad is finally revealed, it’s far more insidious than a CG ghost or practical effects creature. We may not be as unlucky as Peter, but there’s a disturbing allegory here. Emotional and psychological damage of grief and guilt is passed on. Trauma and resentment seeps in and spreads.

Like pretty much all A24 movies, it’s not a movie for general audiences. If you need jumpscares at every plot point to keep you excited, Hereditary is going to be a challenge. It doesn’t break new ground for the discerning cinephiles either, preferring to riff on horror tropes instead.

Still, Hereditary is an immersive horror movie that ends on a chilling note (apart from the handful of images that will stay with you): the cruelty of an inevitable fate.

If you think about it, our parents influence our parenting. Our childhood shapes our defense mechanism and neurosis. Every adult has realized at some point that a part of who they are is a response to their family’s dysfunction. “No one in this family admits what they do!” Annie says in a heated conversation, and it hits close to home.