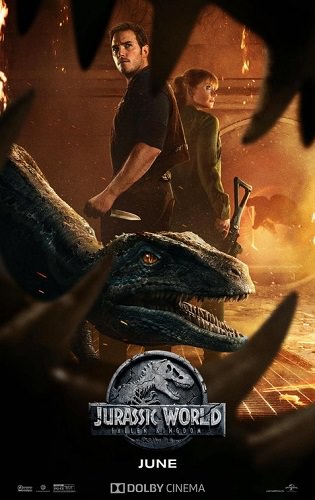 Jurassic World: Fallen Kingdom is a tired, contrived and strenuous imitation of the original that whatever new ideas it comes up with is buried underneath grand scale mediocrity, ludicrous plot and stale chemistry.

It’s been four years since theme park and luxury resort Jurassic World was destroyed by dinosaurs out of containment. Isla Nublar now sits abandoned by humans while the surviving dinosaurs fend for themselves in the jungles. When the island’s dormant volcano begins roaring to life, Owen (Chris Pratt) and Claire (Bryce Dallas Howard) mount a campaign to rescue the remaining dinosaurs from this extinction-level event. Arriving on the unstable island as lava begins raining down, their expedition uncovers a conspiracy that could return our entire planet to a perilous order not seen since prehistoric times. 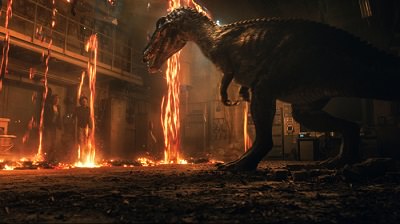 People in these movies, much like Universal Studios, can’t leave dinosaurs alone so after another amusement park here we are at another island where things go horribly wrong.

There’s some nifty imagery here that’s too few such as a reveal in a long tunnel. We’re finally out of the jungle and the action sequences in a mansion provide a different distraction. With more reliance on CGI the franchise is better off relying on smaller scale tension-filled moments, such as a new raptor scaling a rooftop in search of a kid.

A story involving a girl in the Lockwood estate brings in creepy implications. When you’ve created a prehistoric specie out of naturally preserved DNA, what’ stopping you from taking that further? And speaking of human intervention, the movie tells us that no matter how good our intentions are, you can’t meddle with nature and expect it not to bite you in the ass. We must be responsible for what we create and embrace the consequences.

Unfortunately these ideas are barely explored because the movie is saddled with a studio checklist of recycling Spielberg’s greatest hits. The silly and generic plot doesn’t help.

These are peppered along a run-in-the-mill villain plot of a greedy douche in a suit. Arming a group of mercenaries is more practical, but I’m not filthy rich like the people who buy into his scheme so I wouldn’t know how much better owning a raptor would be.

The beefcake and his girlfriend do their best to stop them but this brain and brawn pairing has no chemistry, which is now more obvious when their novelty has worn off. Claire now has boots but remains as a second fiddle to Owen, who remains as an Indiana Jones knock-off that’s only interesting when Blue is around. Bryce Dallas Howard looks glassy-eyed while Chris Pratt goes through the motions. The rest of the cast are more watchable – Daniella Pineda, Justice Smith and Isabella Sermon – that I wondered how the movie could have been had the story been given a new perspective.

Most of the dinosaurs featured are the same from the past sequels and the new creations look the same. Surely they can come up with something other than a raptor looking hybrid. The Jurassic franchise has long been a potboiler, they might as well embrace being a creature feature.

In the end the next movie promises Dinocalypse. Fallen Kingdom is a tired, contrived, and strenuous imitation of Spielberg’s original, pretty much like everything else in this franchise. Jurassic World is in the business of replicating grand scale mediocrity and getting away with it. As long as people watch it, the studio will keep cloning it.