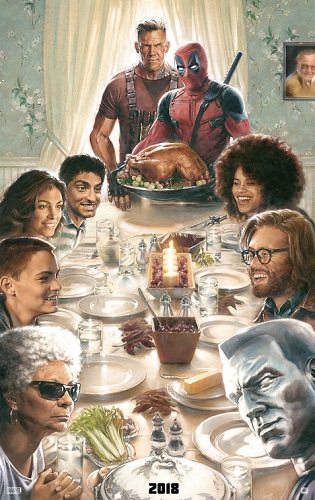 Deadpool 2 is overstuffed and uneven, but this screwball comedy is self-aware enough that its double serving of cartoonish violence, meta-jokes, and obnoxious Ryan Reynolds sells.

After surviving a near fatal bovine attack, a disfigured cafeteria chef (Wade Wilson) struggles to fulfill his dream of becoming Mayberry’s hottest bartender while also learning to cope with his lost sense of taste. Searching to regain his spice for life, as well as a flux capacitor, Wade must battle ninjas, the yakuza, and a pack of sexually aggressive canines, as he journeys around the world to discover the importance of family, friendship, and flavor – finding a new taste for adventure and earning the coveted coffee mug title of World’s Best Lover. 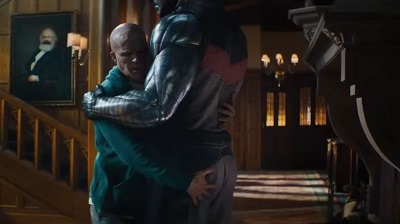 Since there is no sign that the superhero franchise machinery is stopping for any of the studios making bank – Infinity War is still making money while I’m typing this – it’s just apt that we have something to make fun of them.

Deadpool 2 arrives at your doorstep as ordered, with a double serving of everything from the original. Cartoonish ultra-violence that spoofs Wade’s immortality is in every action sequence, pop-culture references and meta-jokes are injected in every dialogue, and a fourth wall break is used at every convenient moment.

Proving its bankability, the sequel now has leeway to do more with twice the explosions and CGI showdowns. The visual effects are little shoddy which reminded me of mid 2000’s CGI, but somehow becomes a part of the movie’s charm. So when Deadpool falls and breaks his spine that his upper body hangs like a limp dick over a table, it’s still funny.

Much of the movie’s bombastic action sequences are caused by Domino whose superpower is being lucky. The new characters are a great addition, with Josh Brolin’s Cable proving to be a nice foil and contrast to Ryan Reynold’s Deadpool.

Reynolds gets it and serves the perfect antidote to the well-hyped but underwhelming Infinity War. That being said, there’s still a whiff of hypocrisy to this franchise that’s more evident than the first one. For all its promises to be a subversion of the superhero genre, its just a spoof that benefits from the same thing it mocks.

The script tries to make a character arc for Wade Wilson and inject some morality into his tumor infested core, but the subplot looks forced. The movie eventually moves on to do what it does best and throws everything at the wall without caring if anything of it sticks.

The whole thing is tedious and exhausting. If you didn’t like the first movie, you’re going to hate this one. Deadpool 2 is the equivalent of an overstuffed burrito that makes a sloppy mess every time you bite into it.

Still, who doesn’t like to indulge every now and then? Deadpool knows exactly what it is and does what its supposed to do with maniacal glee. Between the Marvel clone movies and desperate to be taken seriously DC, we all need a respite from properties packaged as fan service.

Deadpool 2 is fun trash, but it’s also not trying to fool you with with platitudes of heroism that’s really designed to sell tickets.