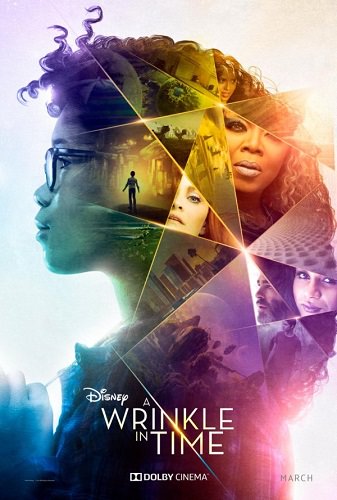 A Wrinkle in Time crumbles underneath the weight of its source material as gaping plot holes, animated projections, and a calculated narrative strip this simplified fantasy adventure of genuine emotion and suspense.

After the disappearance of her scientist father, three peculiar beings send Meg, her brother, and her friend to space in order to find him. 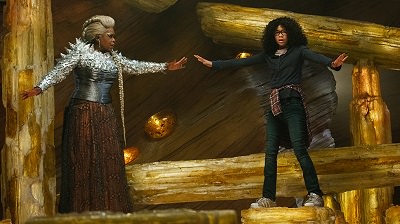 A Wrinkle in Time is a dense piece of literature that has been proclaimed unadaptable. Of course, that wouldn’t stop the Hollywood of today from doing so with the technology available and the demand for big-budget action adventure films.

This adaptation has received a lot of hype from its diversity behind and in front of the camera. And while a WOC led and directed big budget movie is a feat in an industry who don’t mind plucking male indie darlings to take charge of franchises but need award/blockbuster receipts from female filmmakers, these good choices lead to disappointing results.

A Wrinkle in Time is tedious and heavy-handed.

In its attempt to simplify the source material you get a diluted adaptation – a listless fantasy adventure with gaping plot holes where interdimensional fairy godmothers in cluttered hot glue nightmare costumes appear out of nowhere.

The Christian themes are now replaced with empowerment, which is not bad, but the plot keeps hammering it down. Meg can’t catch a break and does everything wrong. Mrs. Which and Mrs. Whatsit is always nearby playing good cop/bad cop while Mrs. Who makes quips from pop culture every time they teleport from one artificial world to another. The CGI backdrop look like animated projections (a flying Kale and 50 foot Oprah doesn’t help) ripped off from some videogame landscape. There’s a heroine’s journey in here, but ends up taking a backseat to Oprah’s New-Age feel-goodery and self-actualization.

At some point she and the other two entities finally leave Meg and her companions alone, but the movie remains uninteresting.

The plot offers a couple of sequences, but there’s no genuine sense of urgency or threat. The fate of the entire universe is reduced to a girl’s self-esteem while its main threat is a spreading inkblot. When the final battle finally comes around, what you get is a mushy exorcism of a grating precocious child possessed by some vague evil entity.

The cast delivers committed performances, but they can’t do much with underdeveloped characters whose dialogue are either stilted or informational speeches.

In the end, what you have here is a bungled adaptation from a director who can barely carve a personality into a CGI tentpole movie. A proper adaptation of  Madeleine L’Engle book is still secret, and maybe it should stay that way.