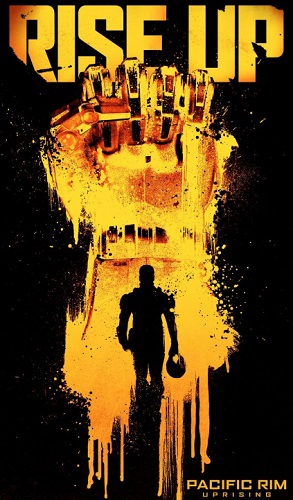 Pacific Rim: Uprising scrubs away everything that made its predecessor distinct, turning into a run-in-the-mill robot blockbuster no thanks to a derivative script, ineffective lead, and forgettable characters.

When an even more unstoppable threat is unleashed to tear through our cities and bring the world to its knees, a prodigal son is given one last chance to live up to his father’s legacy by his estranged sister, who is leading a brave new generation of pilots that have grown up in the shadow of war. As they seek justice for the fallen, their only hope is to unite together in a global uprising against the forces of extinction. 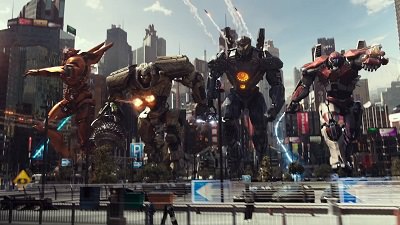 Guillermo del Toro is the speculative fiction version of Quentin Tarantino. He has the ability to repackage a genre and puts his own twist to make it distinct enough. Unfortunately he’s off the director’s chair in this sequel that’s produced by its lead actor, which doesn’t always bode well.

Pacific Rim: Uprising does deliver popcorn entertainment with colorful fighting sequences and high-tech Jaegers. The editing deftly combines sequences together of robot vs. monsters mayhem and cockpit action. So when a monster flings a Jaeger around with its own whip you can also see the pilots swept off their feet in slow motion. John Boyega and Steven DeKnight literally played with toys to come-up with action sequences and it certainly looked like it.

Unfortunately, these changes also lead to something very disappointing. Pacific Rim: Uprising has become your run-in-the-mill CGI blockbuster with Transformers inanity, devoid of everything that has set it apart from other monster movies.

All the fight scenes here happen in broad daylight smack in the middle of a city. Gone are the Lovecraftian imagery of Kaijus that made them nightmarish and the cyberpunk aesthetic of Jaegers that gave them heft. 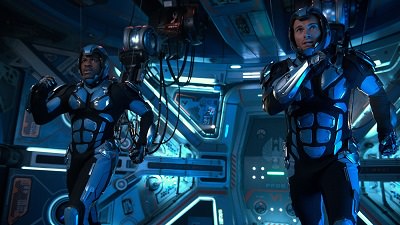 The drift, which is the main feature that makers Jaegers not just your average mecha and connects characters, is used as a plot device. So both the Jaegers and the too many cast of characters also become generic plot devices.

John Boyega has an excitable sense of humor but doesn’t have the commanding presence to carry this movie and convince you that he is the son of Stacker Pentecost no matter how much he says “I’m not my father”. The presence of Scott Eastwood, just like the appearance of Cam Gigandet, once again serves as a warning that you’re in a mediocre movie. His casting is brilliant because he’s playing a wooden soldier but also terrible because of his wooden acting. The rest get their own screentime but provide nothing memorable.

It’s not entirely their fault because the script uses every derivative idea it can find. The once hotshot turned hustler with daddy issues partners up with a scrappy juvenile delinquent with a tragic past. They get enlisted in a pilot program whose unnecessary existence is threatened by a mega-corporation, until a villain triggers an alien invasion and both sides end up working together. A group of greenhorn misfits and the prodigal son of a hero are the only ones left to save the day – family, honor blah blah blah.

It’s an effective mash-up of Transformers (at some point there’s even a rogue Jaeger here), Power Rangers and Independence Day, which includes a ridiculous super monster villain and a dumb contrived ending that you would expect from any of these movies.

Pacific Rim: Uprising is not a sequel. It’s a blockbuster star vehicle for John Boyega and a potboiler made for the Chinese market.