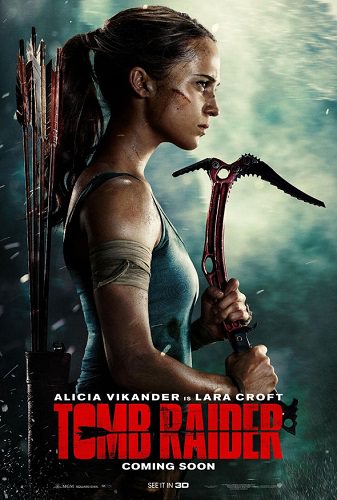 Tomb Raider is supported by a committed lead, but this gritty yet bland reboot is buried underneath an uninvolving uninspired action adventure filled with Indiana Jones plot cliches and lifeless characters.

Lara Croft (Alicia Vikander) is the fiercely independent daughter of an eccentric adventurer who vanished when she was scarcely a teen. Now a young woman without any real focus or purpose, Lara navigates the chaotic streets of trendy East London as a bike courier, barely making the rent, and takes college courses, rarely making it to class. Determined to forge her own path, she refuses to take the reins of her father’s global empire just as staunchly as she rejects the idea that he’s truly gone. After solving a familiar puzzle from her childhood she discovers her father’s secret and unlocks the mystery of his death. 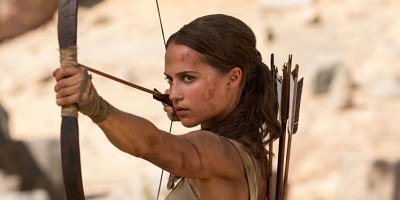 While Angelina Jolie looked the part and oozed sex appeal as the original Lara Croft in the movie, she’s really just adventure barbie. Well, it was the early aughts so you can’t exactly blame her for that. As per Hollywood tradition the franchise is rebooted with current fave Alicia Vikander, who’s been everywhere from period dramas to sci-fi films. So an action franchise is just the logical next step.

It’s the same but grittier Lara Croft – she’s not an invulnerable two gun-toting (well not yet) superhuman anymore – from the 2013 reboot of the game. Alicia Vikander looks the part, adding muscles to her lithe frame. The rest of the casting fits too, with Walton Goggins as an interesting choice as a desperate man and Daniel Wu wasn’t subjected to stereotypical Kung Fu.

The movie trades incredible leaps with super speed but the rebooted franchise has a more realistic take that it’s not as campy as its predecessor. So the new Lara gets hurt, beaten up, and bleeds. A few action sequences refer to the game and the fight scenes are serviceable enough (the bow and arrow thing gets a bit silly but its a character bit so I give this a pass).

Unfortunately no matter how much Vikander tries to sell her role – and the cast too – she can’t redeem a movie that’s intent on being no more than a mediocre blockbuster.

The plot is a run-of-the-mill action adventure filled with Indiana Jones cliches such as the temple of doom, exotic history involving a curse and bad guys working for a secret organization. At some point, Lara gets on top of a mummified corpse to hide from a henchman.

The production design isn’t memorable either, with elements from Japanese culture to create a sense of dread or mystery but they’re too generic that we’re supposed to be scared by a pit of bones and stacked mummified handmaids in open shelves. The booby traps are a riff on the typical death from above and below and they’re too predictable. The camerawork and musical score isn’t invested in the action either, with a few slow motion moments and a monotonous drum track.

Okay, maybe I’m expecting too much from a movie adapted from a videogame about an Adventurer Archeologist inspired by Prince of Persia. However, the script doesn’t make any effort to add more than one shade of characterization to compensate for this rote blockbuster offerings, filling the screen with cardboard cutouts and flipping motivations.

Alicia Vikander is no doubt a good actress as evidenced by Ex Machina, but she doesn’t have that commanding presence – like Scarlett Johansson, Gal Gadot or Danai Gurira – needed for an action role that without any compelling characterization for her to work with, she’s bland.

Instead of tackling why an aristocrat would give-up a comfortable life to wait for her missing father and live as an aimless broke young woman and how this has changed her life (and how she managed to hide her identity before the age of 21), you get a series of flashbacks of him saying goodbye. These, and the clues, are repetitively injected into the plot so it looks more like an unfortunate guided tour rather than an adventure.

The movie tries to squeeze some emotional heft into the story using the father-daughter relationship, but its too Hallmark predictable and underwritten to have an effect. There’s something here about loss, family, and confirmation bias but the script doesn’t support it enough to be convincing.

In the end, the movie wraps up like every other first installment of a franchise. Tomb Raider has a decent idea of making a gritty reboot. If only they had paid attention to the quality of the rest of the movie as much as they did to the acting.