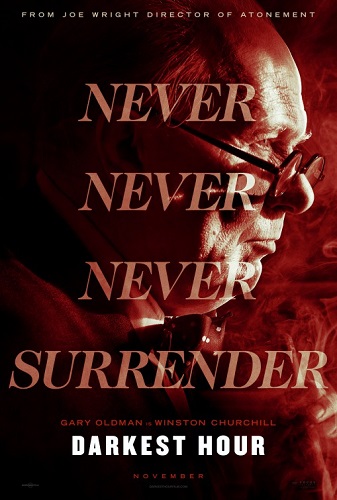 Darkest Hour is a well-executed and deftly-acted but obviously crafted Oscar bait composed of a retrograde Greatest Man in History, featuring a simplistic and patriotic version of Churchill precisely designed to bag gold statues.

During the early days of World War II, with the fall of France imminent, Britain faces its darkest hour as the threat of invasion looms. As the seemingly unstoppable Nazi forces advance, and with the Allied army cornered on the beaches of Dunkirk, the fate of Western Europe hangs on the leadership of the newly-appointed British Prime Minister Winston Churchill (Gary Oldman). While maneuvering his political rivals, he must confront the ultimate choice: negotiate with Hitler and save the British people at a terrible cost or rally the nation and fight on against incredible odds. 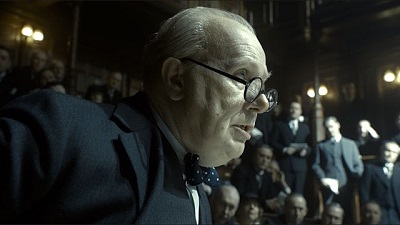 It’s awards season and we all know what means. A Great Man in History wrapped in an Oscar bait.

In fairness, Gary Oldman is committed in selling this chamber drama. He disappears into the fat suit and prosthetic to deliver a convincing performance. The rest of the cast are great too, creating an interesting clash of personalities. Ben Mendelsohn made the wise decision of portraying a man coping with a speech impediment, rather than exaggerate it to define his role.

Each of these characters are positioned so precisely in every scene that even someone who isn’t knowledgeable of cinematography will marvel at what they’re seeing. Camerawork and lighting – with the help of production design – give every frame a cinematic flourish that even when King George VI is merely standing in a room, it’s atmospheric.

Unfortunately, no matter how Bruno Delbonnel and Joe Wright tries to convince us how dramatic a scene is – such as an emotional exchange between Churchill and Elizabeth Layton as she tries to type his tragic ultimatum to Brigadier Nicholson – through precise lighting and blocking, it all rings hollow.

The audience doesn’t get a sense of how really dire the situation is and the bird’s eye view of computer-generated bombings only make it less convincing. The movie focuses on Churchill coping with his detractors and lack of confidence in his appointment as Prime Minister. His sugarcoated narrative goes through every trope imaginable for two hours – the least likely hero with quirky habits, at least two female supporters, a stuffy arch rival, an unsolvable crisis, and an authoritative figure that he manages to win over.

The Darkest Hour can be summarized with one scene – Churchill incites the nationalistic furor of a crowd denouncing fascism and inspired by a girl, recites a poem about perseverance only to be completed with the last verse by a black man. In case you don’t know, the real Winston Churchill is racist and imperialist.

Even when seen as a British prestige drama – retrograde history aside – the movie is an actor’s showcase with blatant showboating. Darkest Hour fancies itself as a portrait of Churchill. In reality it’s a simplistic version specifically crafted to highlight one moment in history.

Darkest Hour is a safe, predictable biopic that only exists to win gold statues and it will.