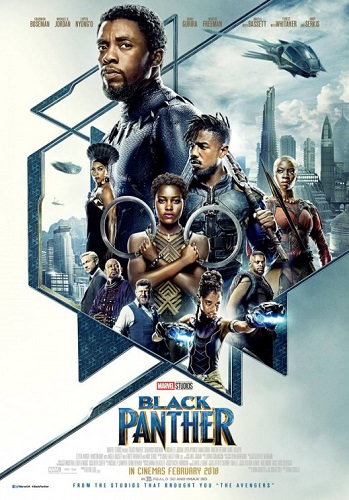 Black Panther transcends its genre to be more than just another MCU franchise – a vibrant dynastic drama with a genuine identity, honest-to-goodness stakes, rich themes and endearing characters – and still remain as entertaining as any other superhero movie.

After the events of Captain America: Civil War, King T’Challa returns home to the reclusive, technologically advanced African nation of Wakanda to serve as his country’s new leader. However, T’Challa soon finds that he is challenged for the throne from factions within his own country. When two foes conspire to destroy Wakanda, the hero known as Black Panther must team up with C.I.A. agent Everett K. Ross and members of the Dora Milaje, Wakanadan special forces, to prevent Wakanda from being dragged into a world war.

MCU churns out movies like an oven operating clockwork to bake batches of cookies with the same formula. While the sameness doesn’t bother people who want to escape their mundane lives for an hour or so, the uniform corporate aesthetic prevents its franchises from having a personality of its own or push these films to give more than just whiz bang action. Fortunately once in a while, something great happens when creative minds are left to speak their own voice.

Black Panther is a culturally significant film steeped in African influences that’s as if we’re seeing what a Marvel could be too, if it let the makers behind its properties have their own vision, especially in a movie that has ties to a real community. The afrofuturistic production design of Hannah Beachler – along with the costume design by Ruth Carter – perfectly melds tribal origins with comic book technology. Inspired by the prominent landscapes of Africa and local tradition, you have detailed worldbuilding that even the colors used has its own story. And yes, the musical score from Kendrick Lamar is also used as a storytelling device, featuring a variety of styles from Black music.

This genuine sense of culture and identity is applied to its characters too, that lead to interesting dynamics with subtext. Coogler integrates the characters within the story, so they don’t merely serve as props for T’Challa, clue to another MCU movie or comic relief. So when Okoye upholds duty above all, even at the stake of her personal relationships, it has a weight to it.

The reliable cast is given their fair share of screentime and characterization that the movie boasts of another rare element in the MCU – a complex villain. In close inspection, Black Panther and Killmonger are two opposing sides with the same goal. T’Challa is noble and wise, but he is sheltered and still capable of brutality. Erik is cold and violent, but he has experienced the harsh reality of the world and still cares for his people. He is not just here to be a formidable villain. He is a reminder that history repeats itself, and T’Challa has to make a decision if he wants to follow the same path.

Black Panther is a movie that has a lot of things in its mind and each of them are weaved into a narrative that is driven not just by one character. And this is what truly makes this superhero movie remarkable.

It is not just an origins story of T’Challa as the titular character, it’s also the beginning of Wakanda as a sovereign to the rest of the world. Alongside the challenges faced by a king, is the struggle of a nation. Black Panther tackles honor and compassion as well as internal conflicts and global politics. Will T’Challa let Wakanda continue to flourish in the shadows while its other people suffer in the hands of its would have been colonizers? It’s an old tale of tradition, change, and history but done so with an authentic voice that you can’t help but be immersed in it.

Fear not, this doesn’t mean Black Panther is boring. There’s an interesting contrast of weaponry, variety of action sequences, and humor to balance with its serious themes. In a car chase, Okoye points out how guns are primitive while she wields an archaic designed but vibranium enhanced spear. This is a movie that has a bit of everything – espionage, civil war, duels, and flashy special effects. Fortunately, the movie doesn’t lean too much on comedy and the chemistry between the cast make it endearing.

While Ryan Coogler and the rest of the team behind the camera are able to pull this off – it sounds a helluva a lot for a superhero movie and it is – Black Panther is still an MCU entry. It isn’t devoid of plot cliches and a simplistic ending.

Nonetheless, it is still such a well-crafted piece that even when the final showdown plays out predictably, you have an emotionally grounded conclusion with a powerful message.

Black Panther is an important movie that’s able to transcend its genre even while beholden to its stakeholders. It’s grand, nuanced, colorful, vibrantly diverse and has something to say in an era where democracies around the world are sliding into authoritarianism. People today are in dire need of escapism or to close themselves off to fend for their own, but as Wakanda has shown us, distrust and apathy can perpetrate the same violence we are fighting against.