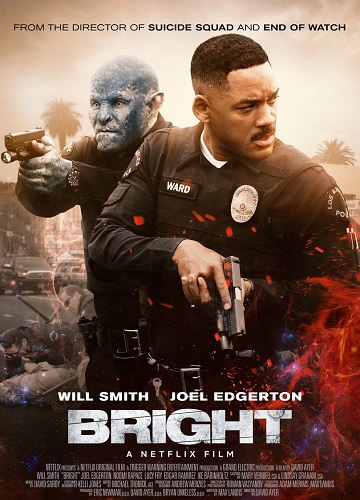 Set in an alternate present-day where humans, orcs, elves, and fairies have been co-existing since the beginning of time. Bright is genre-bending action movie that follows two cops from very different backgrounds. Ward (Will Smith) and Jakoby (Joel Edgerton), embark on a routine patrol night and encounter a darkness that will ultimately alter the future and their world as they know it. [Netflix] 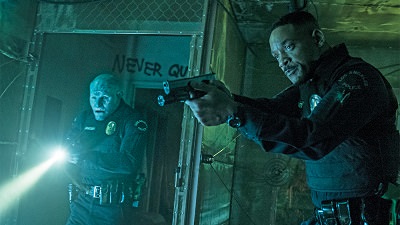 Netflix tries to prove that its just like one of the big studios with a blockbuster. Well, it succeeds – the platform now has its own derivative franchise that rivals the Transformers in its inanity.

Bright attempts to tackle race and police brutality through an alternate universe where End of Watch meets Warcraft with a touch of LOTR. Racism shown through fantasy races has already been tackled by videogames, but setting it in the present day combined with a cop action movie sounds intriguing. However since Max Landis is the least of all people who should be writing about these hot button topics, the result has been aptly described as a 90 Million Steaming Pile of Orc Shit.

The movie starts with an allegory that paints black people as Orcs. On top of this bad idea that compares minority to monsters who only have themselves to blame for their fate, whatever political statement it tries to make is just window dressing in its attempt to look original. Bright is really a buddy cop comedy combined with fantasy. Both sides are dull and ill-conceived.

You can’t depend on a blockbuster to have fleshed out characters, but the performances are decent enough even with the inane dialogue such as “If you act like my enemy, you become my enemy” (and the movie wants you to take it seriously). Unfortunately the talents of the cast, including Noomi Rapace and Edgar Ramirez, is wasted. 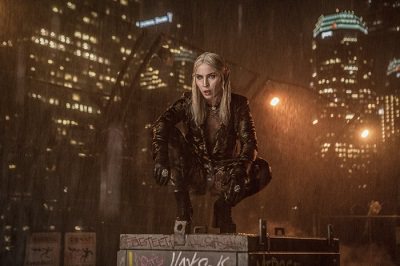 The worldbuilding doesn’t offer anything new nor creative – Elftown is a generic business district of skyscrapers save for its traffic islands with gold rail, Orcs live in the ghettos, and the magic feds is literally the Magic Task Force. The mythology behind it is muddled so you have to settle with the fact that elves run the world. The Orcs have made bad choices since the great War – even though the Nine Armies was united by a farmer Orc named Jirak – so they’re the reviled underclass. The humans meanwhile are…there.

Our two heroes – one jaded human veteran and one naive Orc rookie – gives the viewers a quick tour of this mythrilpunk (term not mine unfortunately) world and meets a dirty lunatic. Just like every homeless crazy person in movies, this sword wielding loon speaks of a prophecy involving the return of the Dark Lord.

On top of these derivative ideas (yes there’s a magic glowing pool), the script can’t even tell its own story straight. The plot mechanics of this impending doom is useless. The villains are de-powered and the heroes are unkillable for plot convenience. It’s not even clear what this movie is really about. There’s a magic conspiracy plot with a vague villain, a misguided half-assed take on race sensitivity through Orcs, and some black dude caught up in all this shit.

Okay, we can’t trust blockbusters with logic either. However the action has nothing to offer too. The gun fights are poorly lit and generic shootouts – in the hood, in a strip club, etc. Whatever gritty action that David Ayer was able to deliver in End of Watch just becomes cartoonish here.

In the end, well I don’t have to tell you because you’ll know.

Bright is panned by the critics yet lauded by audiences. Given the shitty turn of current events, the movie can pass as entertaining especially if you don’t have any standards in mind for a weekend viewing. Fortunately, this wasn’t released in theaters and can easily be added through your Netflix queue in case you want something dumb to doze off to.