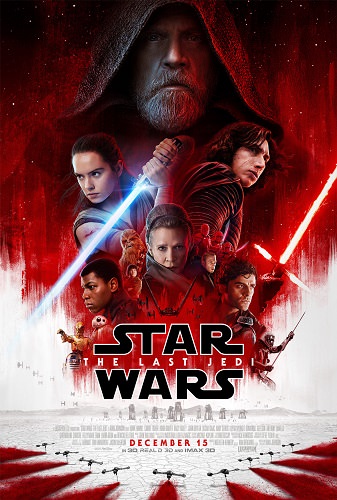 The Last Jedi strikes down the old to push the franchise into somewhere new, delivering a nuanced and thoughtful tale that emphatically builds on the past, offers purposeful dazzling action, and deft cinematography that elevates perfunctory blockbuster fanfare.

Rey develops her newly discovered abilities with the guidance of Luke Skywalker, who is unsettled by the strength of her powers. Meanwhile, the Resistance prepares to do battle with the First Order.

It’s easy to be cynical about any new big budget installment from a classic franchise. Rogue One was an unnecessary retcon that added nothing to the story as Disney pandered to audiences for diversity. You have a flat white character surrounded by one-dimensional POC – one of which is a blind Asian monk. Recurring characters turned CGI abominations make a cameo, along with Darth Vader.

Fortunately, The Last Jedi finds a way to pay homage to its legacy as well as offer a new nuanced perspective to the saga.

With a clever screenplay and deft editing that DCEU movies can only dream of, The Last Jedi is able to interweave parallel plotlines, develop its characters, and add layers to a simplistic theme.

Right of the bat, the movie dives into the thick of things – the Resistance is on a desperate escape from a more sophisticated heavily armed First Order. It’s a fitting opening sequence that sets the tone for the rest of the movie.

Each of the cast are given enough screentime with their own derring-do – Rey drops out of grid to convince a disillusioned Luke Skywalker to help the resistance, Finn embarks on a mission with Rose, Poe tries to navigate the internal politics of the resistance to save the remaining survivors, and Kylo Ren is still struggling to contain the remnants of light in his dark emo soul. At the same time, these subplots also delve into the morally grey areas of war intermingled with heroism and sacrifice – misguided intentions, blind hatred, false hope, and war profiteering – adding more dimensions or providing needed closures to the characters as a result. This is the first Star Wars movie that admits the failures of the Jedi Order, and acknowledges that archaic dogma is not enough to adopt in changing times.

The cast does well as they finally have something more to work with. Teaming up Finn and Rose fits character-wise (making Kelly Tran not just another token for diversity), which leaves Rey (the reveal of her parentage fortunately blasts the popular fan theories) to deal with Kylo. Poe is being built to become a leader, which Oscar Isaac has more than  enough charisma for.

Rian Johnson plays with fans assumptions and upends them to keep all this engaging. Humor is added here and there to balance with the angst. The porgs is just another merchandising tactic (I prefer the crystal fox), but that’s to be expected when you’re a Disney property.

Don’t worry, the plot mechanics doesn’t hamper the action choreography and cinematography. There’s a dazzling clarity to all the action from the air combat to the duels through the use of color, compositions, and camerawork. Johnson avoids cluttering the screen, employing purposeful action sequences that you can easily follow. More importantly, he gives enough room for humanity in the action with deft framing for emotional scenes. So you get a sense that there’s something bigger at stake.

While Rian Johnson is able to elevate what typically ends up as a filler in trilogies, discernible fans will see recycled pieces from Return of the Jedi and Empire Strikes Back. Snoke isn’t really much of a threat here, and a novice Jedi could take down his royal guards. Overall, this sequel builds the characters rather than move the story forward.

Nonetheless, Johnson does enough to give this sequel its own personality while fulfilling a studio checklist. He takes the franchise to somewhere new and bold, where the story is given to flawed yet determined people who want to fix things because its right, not because they’re chosen. It dares to question its own mythology instead of just paying another homage to a legacy.

The Last Jedi makes you look forward to the conclusion of this series and hints at a new future in this intergalactic saga. It’s time to build new beginnings and stand on a new hope with a fitting message – it’s not about fighting what you hate, it’s about saving what you love.