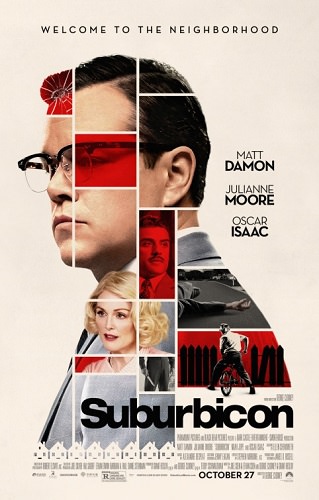 Suburbicon is supported by great performances, but this Coen pastiche is its own enemy as disjointed storytelling, one-note characters, and tone-deaf politics turns it into a misguided uninvolving crime thriller.

Suburbicon is a peaceful, idyllic suburban community with affordable homes and manicured lawns…the perfect place to raise a family, and in the summer of 1959, the Lodge family is doing just that. But the tranquil surface masks a disturbing reality, as husband and father Gardner Lodge (Matt Damon) must navigate the town’s dark underbelly of betrayal, deceit, and violence. 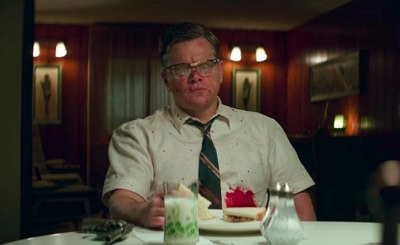 The nicest communities always end up as the most fucked up places. Well in movies at least. George Clooney makes his second feature using a satire of post-war America, where he can conveniently point out moral decay and racism from a safe distance.

Suburbicon is at least entertaining thanks to the slapstick violence borrowed from the Coen brothers’ writing. After surviving a home invasion, Gardner Lodge attempts to move on but couldn’t grieve in private because the whole community keeps weighing in on his personal business. But it turns out that this attention is annoying for a whole different reason. What soon follows is a string of events where Lodge tries desperately to keep a plan from crumbling apart. This is all told through the point of view of a kid, surrounded by a lot of awful people swindling each other.

The setting is the much fetishized 50’s America, with its manicured lawns, cookie cutter houses, and inhabitants who have come as far as Mississippi. Imagine Pleasantville, but with a sprawling suburb that’s a city of its own with a grocery store and a school. Production design is superb in establishing the homogeniety of the setting.

Performances from the cast are great even though Matt Damon looks perpetually grumpy. Julian Moore is always reliable. Oscar Isaac easily shines as a charismatic investigator. Noah Jupe is amazing as Nicky, whose unforced friendship with a neighbor and dedicated Uncle provides some light in a nihilistic story.

Even with a by-the-numbers crime thriller, this side of the story is amusing enough, livened up by its performances. Unfortunately it’s crippled by its own modified script. Suburbicon is based from a shelved script by the Coen brothers, which George Clooney and Grant Heslov dressed up in their attempt to create something new. 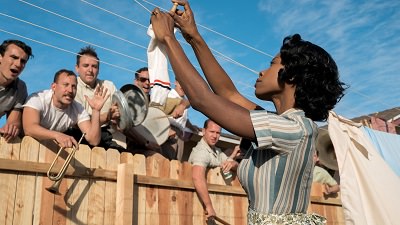 You see, Suburbicon actually opens with a black family moving into a white community, based from the lives of William and Daisy Meyers who were the first black residents of Levittown, Pennsylvania. Clooney addresses this racially charged issue head-on, with the residents of Suburbicon quickly turning into an angry mob who insists that black people should be educating and bettering themselves, just far away from them as much as possible.

But whatever political statement Clooney is trying to make here is just merely decoration, as the real focus is the shenanigans of the Lodges. The viewers are always kept one information behind their story, while the trials and tribulations of their neighbor become background noise.

This half-assed 60’s racial drama doesn’t go well the zany 40’s film noir, flimsily connected by the bond of two children then packaged into a cartoonish 50’s satire. Clooney’s efforts to “improve” the script resulted into two wildly different stories that kept interrupting each other and filled with one-note characters.

This is a movie where a black family is trapped in their house because of a racist mob in their front lawn while a white dude uses his kid’s bicycle to flee a crime scene.

I can see what the script is trying to do here: black people get blindly persecuted while the white people next door get away with murder. The problem is the script’s clashing tones and tone-deaf politics prevents these ideas from coming together. So Suburbicon becomes the very thing it condemns: black people are used as tokens in a white narrative.

The movie concludes with an ending to drive its message home, but based from what Suburbicon has given us, it registers as sincere pity and insincere kindness.

Suburbicon is still watchable, especially for viewers who only want to be entertained. The movie shines as a satire of how a homogeneous community can end up covering the rotten eggs in its midst. Unfortunately it is sabotaged by misguided intentions that turns it into an inferior Fargo substitute.