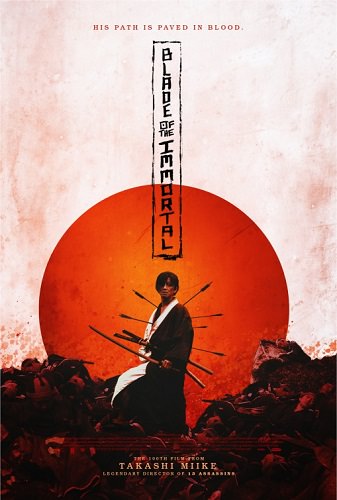 Blade of the Immortal is a serviceable samurai movie but this 100th feature from Takashi Miike is ultimately a forgettable hack and slash action flick, and offers average thrills compared to its director’s previous works.

Samurai Manji has taken a lot of lives, both innocent and guilty, and now lives life in feudal Japan as a criminal. After being cursed with immortality until he kills enough evil men, Manji meets a young girl who enlists him to be her body-guard. Swearing loyalty, protection and vengeance against the group of sword fighters who slaughtered her family, the unlikely duo set on a remarkable quest to make right against those who did them wrong.

Anyone who has gone into the deep end of graphic violent movies have encountered Takashi Miike, who marks his 100th feature with a samurai movie.

Blade of the Immortal is based on a manga and despite a 30 volume series that span over 20 years, the creators behind the samurai movie managed to create decent adaptation.

Tetsuya Oishi structured the plot around one-on-one duels that culminates into one big showdown. Takashi Miike pits Manji against a range of enemies including a grotesque henchman, a prostitute who’s secretly warrior, and your old-fashioned bounty hunter.

While the themes – life and death, sin and redemption – explored by the manga are inevitably skimmed over to condense the material, the story still has interesting subplots – rival schools, political conspiracy, and the tragedy of immortality that prevent the story from getting monotonous.

The cinematography here compensates for the lack of sword choreography, with close-ups and medium shots that when pulled back, reveal a stunning display of carnage. The set pieces are generic but the costumes are decent enough and the musical score stand out in highlight moments.

Overall though, Blade of the Immortal is nothing more than a straightforward action flick hampered by forgettable elements, a muted Takashi Miike, and a bloated running time of more than 2 hours.

The leading characters, Takuya Kimura and Hana Sugisaki who play Manji and Rin respectively, don’t have any chemistry. While both are decent enough, they’re easily overshadowed by the more charismatic Sota Fukushi, who manages to convey the duality of his character with depth.

Anotsu’s Itto-ryu are supposed to be a lethal group but unless you’re familiar with the manga, you won’t get a sense of how dangerous they are in the movie.

The duels have some inventive moments because of the movie’s supernatural elements, but the action scenes get repetitive fast, mostly depending on how much punishment the hero can take. The swordplay here is free-form and brutal but if you’re expecting more than stabbing, impalement, and dismemberment, you won’t find a Chanbara here. If you want a choreographed non-computer generated live-action swordplay, take a look at the similarly manga-based samurai movie Samurai X.

For a movie that easily lends itself to gore under the hands of Takashi Miike, the action just goes through the motions especially when you consider that this is the director of Ichi the Killer.

In fairness, the makers behind this adaptation is saddled with a hefty source material and still manage to deliver a serviceable samurai movie. It’s not for repeated viewings nor does it stand out from or equal to any of Miike’s notable works, but good enough for a rental or streaming over a stay-in weekend.