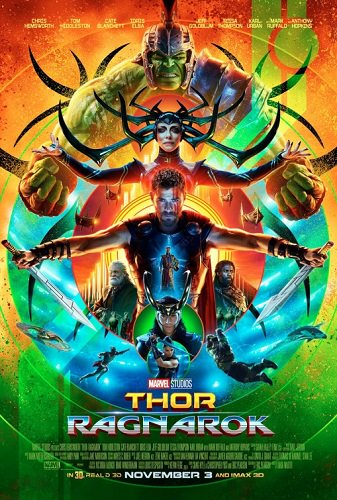 Albeit confined to the Marvel formula, Thor: Ragnarok is still a fun cosmic adventure thanks to its self-aware humor, colorful visuals, spirited cast and a director who managed to inject it with a personality.

Thor is imprisoned on the other side of the universe without his mighty hammer and finds himself in a race against time to get back to Asgard to stop Ragnarok — the destruction of his homeworld and the end of Asgardian civilization — at the hands of an all-powerful new threat, the ruthless Hela. But first he must survive a deadly gladiatorial contest that pits him against his former ally and fellow Avenger — the Incredible Hulk!

So here we are, another MCU franchise coming to an end. Thor and Dark World were decent enough installments, but they were too serious for a source material that’s inherently ridiculous to become a live-action film. In Ragnarok, it looks like Taika Waititi and the writers have learned the necessary lessons to deliver a blast, giving us what a Marvel movie looks like when its handed to people who knows exactly what to do.

They finally accept that you can’t play this straight and embrace the fact that Thor, as a franchise, is essentially a cosmic adventure of a realm-hopping God.

Ragnarok is filled with everything that set it aside from the rest of the MCU – royal family squabbles that lead to world destruction, love-hate buddy comedy, and Heimdall in action. These elements are mixed in an action-adventure plot. The script steers the movie in interesting ways so the plot remains engaging even when the proceedings become familiar. On top of this, Taika Waititi injects a self-aware humor (see: What We Do in The Shadows) that keep things fun and funny. So when Thor throws a ball at the glass assuming it will impressively shatter in one throw, it bounces back and hit him in the face.

This extends to the immersive worldbuilding, brash action sequences, and colorful visuals. Sakaar is an amusing backdrop for Thor’s detour. He gets to do more here other than swing and summon the hammer. While the battle scenes are bloodless, the camera doesn’t shy away from showing its consequences. Special effects and production design give the visuals bright colors.

Chris Hemsworth looks like he’s having fun – Thor’s finally in on the joke and gets a personality. The comedy has always been about people’s reaction to him. Now he doesn’t take himself too seriously. The supporting characters add an amusing mix of misfits.

That being said, Ragnarok is still another obligatory Marvel movie in the pipeline.

MCU has always had a villain problem, and this movie isn’t an exception. Hela is an underwritten character played by an underused Cate Blanchett.

Ragnarok still follows the same outline like any other Thor installment – Odinson gets kicked out of Asgard, temporarily weakened in some way, learns his lesson, and saves the day. Now with a gang because Marvel loves its Misfit Mobilization Movement as an excuse to add more characters.

The movie has to establish its connection with the MCU, so there are narratively pointless cameos here. Save for a great battle in the beginning, there aren’t enough action scenes as Thor eventually gets lost in the thick of things later on. Sakaar would’ve been a opportune backdrop for him to fight in new ways and his dynamic with bounty hunter SR-142 is interesting to explore considering her real identity, but that would’ve cut Hulk out of the picture. I’m sure plenty of Marvel fanboys would disagree.

Ragnarok is the most Marvel movie to date with its irreverent humor and slapstick comedy. It’s like watching a cartoon that can apply to a broad audience. That’s what Marvel movies have always been and will be as long as their products make money.

Still, come to think of it, the Thor franchise is cartoonish after all. Ragnarok is the most fun and fitting close to a trilogy that has, in hindsight, consistently developed its character. In the end even though Thor is already a God, he shows us that leadership still has to be earned.