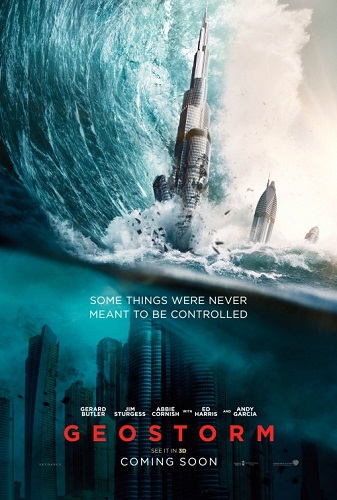 Geostorm is a dull, hackneyed decade behind disaster movie and blockbuster wannabe chock full of generic elements that it’ll make you wonder who actually thought it was worth spending 120 million dollars on (marketing costs not included).

After an unprecedented series of natural disasters threatened the planet, the world’s leaders came together to create an intricate network of satellites to control the global climate and keep everyone safe. But now, something has gone wrong—the system built to protect the Earth is attacking it, and it’s a race against the clock to uncover the real threat before a worldwide geostorm wipes out everything…and everyone along with it. 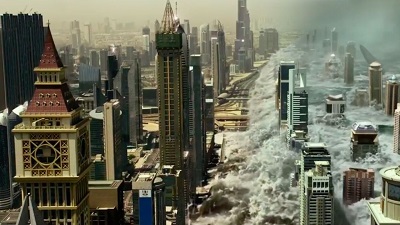 Because I didn’t want to spend any more time at the gym on a Monday, I decided to watch Geostorm. The combination of a depressing diet on chicken breasts and current political events made me want to see a predictable movie of world destruction and wish fulfillment peace.

Unfortunately Geostorm doesn’t even manage to be a serviceable blockbuster flick.

Here, 17 (?) nations collaborated on the single most important innovation of the 21st century to create a project called the “Dutch Boy”, a system of satellites that fixed climate change by manipulating the weather controlled by – of course – the US. This 90’s disaster movie science quackery is mixed with more ridiculous and trite plot developments.

Eventually some asshole ruins everything for everyone. Scientist Jake Lawson has to go back into space to bark orders while his bureaucratic brother Max has to get hold of the key. It’s a disjointed mess between hokey science and by-the-numbers political conspiracy.

Meanwhile, people run away from bad weather. The CGI here is actually decent but the disaster sequences are either generic, rote, or ridiculous – e.g. a stadium struck by lighting explodes – that you’ll feel like it’s the 90’s again. Devlin seems to think that it is, so the emotional scene is a dog in danger and suspense is a bikini clad girl running away from a White Walker’s dream. By the way, these scenes are a handful bec. there’s more talking by a bunch of people designed to stir contrived drama.

The characters are so stereotypical their roles are telegraphed – the redeemable smart-ass jerk, the more responsible younger bro, the bad-ass girlfriend, the child to tug your heartstrings, the president played by a character actor from action flicks, the obvious traitor played by an actor who’ve played a villain in action flicks, the hacker millennial who drinks a lot of soda because that’s what kids do and an assortment of token imports. 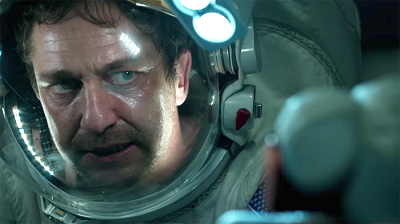 None of the cast are memorable except for Talitha Bateman, who looks more invested in this than anybody else. In fairness they have nothing much to work with anyway. At some point Andy Garcia shouted “marry her!” but it was so lifeless it might as well be a voice-over added post-prod.

They just go  through the motions behind a movie that gets increasingly dull and incoherent as it progresses. Towards the end, you’ll find staples of the generic action flick starter pack: a special code, a lever, a virus, and a great escape. All of this is made in effort to stop a Geostorm, which is more like a comic book villain.

The movie thinks it’s a blockbuster when in reality its formulaic script, generic characters, flashy but uninvolving effects, and pseudo-science supervillain actually make it a B-movie with a 120 million budget.

When the credits rolled I wished I should have attended a gym class or spend more time with the erg machine.

Climate change does provide interesting material that could be mixed in with standard disaster movie plotlines. It could’ve been about the entire world coming together to solve its biggest problem, especially when you consider that the subject is met with active skepticism, steeped in bureaucracy and made complicated by murky consensus from the scientific community.

Unfortunately, Devlin just wants to present a worst case scenario reel to make his first disaster movie, turning Geostorm into an over-funded blockbuster wannabe and an unnecessary resurrection of a dead – if not dying – subgenre.