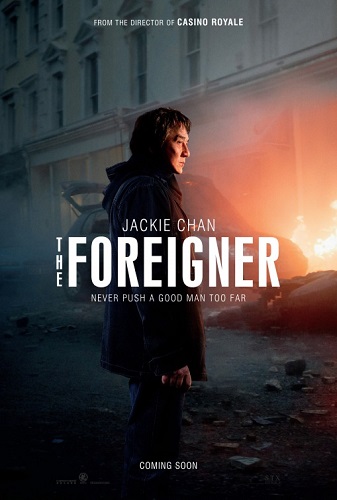 Albeit filled with good performances, The Foreigner remains as a convoluted political thriller and by-the-numbers action flick no thanks to its fragmented script and over-plotted storytelling.

London businessman Quan (Jackie Chan) sees his long-buried past erupt in a revenge-fueled vendetta when the only person left for him to love — his teenage daughter — is taken from him in a senseless act of politically-motivated terrorism. In his relentless search for the identity of the terrorists, Quan is forced into a cat-and-mouse conflict with a British government official (Pierce Brosnan), whose own past may hold clues to the identities of the elusive killers. 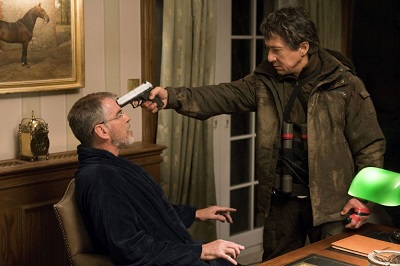 Jackie Chan trades his happy persona for a serious turn in an action suspense flick. The “Taken” role is based from “The Chinaman”, a book adapted to more a sensibly titled movie “The Foreigner”.

This is Chan’s most dramatic role to date, playing as a grieving father out for vengeance. The movie over-emphasizes his age despite of the fact that the actor is already in his 60’s, but I guess that’s what war does to you according to the story. Likewise, Pierce Brosnan here is a silver-haired politician with a thick Irish accent with a similar violent backstory. Both turned in good performances that you can see two men on different sides of the coin with the same undercurrent.

Film direction and a score by Cliff Martinez add flourishes to the movie. Probably taking a break from the death defying stunts that he used to do, Jackie Chan is not using his trademark comedic yet still plenty crazy Kung Fu style here. Quan uses guerrilla tactics in an attempt to find his daughter’s killers.

Unfortunately though, despite what the marketing of The Foreigner tells you, this isn’t a Jackie Chan movie at all.

The dad on a vengeance story is overtaken by a convoluted and over-plotted political thriller. Quan, who is supposed to be the lead, disappears in the background as the movie focuses on Hennessy, who’s trying to score a deal to further his political career while dealing with a terrorist resurgence based from “The Troubles“.

All this political intrigue and conspiracy leaves little to Jackie Chan, who’s relegated to fighting generic thugs and when he’s given a formidable opponent, its too little too late. The action choreography is brutal and effective, but these fights remain as skirmishes lost in a clunky narrative. Much of the film is overstuffed with double-crossing, exposition, and a revolving door of one-note characters from Brosnan’s side of the story.

In the end, there’s really nothing to care about. Quan’s tragic story is a bait-and-switch excuse to cast Jackie Chan, which also leaves no substantial thread to connect two storylines together.  As a result you have two movies who keep interrupting each other in one suspense flick.

All this turns The Foreigner into a convoluted political thriller and a by-the-numbers action movie. Worse, it leaves a sour note that Asians end up as collateral damage and it still falls on them to stop white-on-white violence, with a Chinaman to set things right.