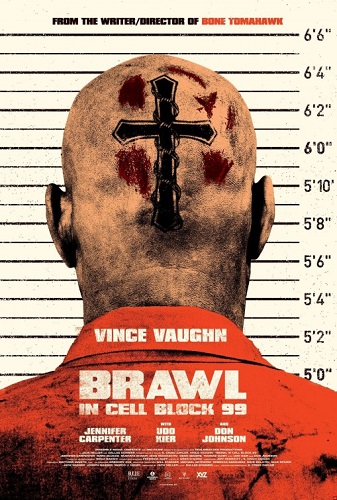 Brawl in Cell Block 99 is a one-note action movie, but committed performances and screenplay turns this prison grindhouse flick into a serviceable bone-crunching B-movie entertainment.

A former boxer named Bradley (Vince Vaughn) loses his job as an auto mechanic, and his troubled marriage is about to expire. At this crossroads in his life, he feels that he has no better option than to work for an old buddy as a drug courier. This improves his situation until the terrible day that he finds himself in a gunfight between a group of police officers and his own ruthless allies. When the smoke clears, Bradley is badly hurt and thrown in prison, where his enemies force him to commit acts of violence that turn the place into a savage battleground. 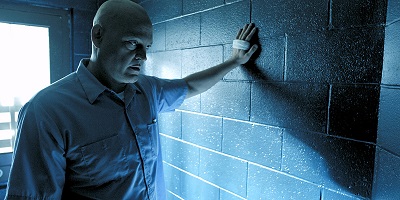 I wasn’t impressed by Bone Tomahawk as others were, but I got curious enough to see S. Craig Zahler’s second feature because it featured someone who’s usually on the comedy side of mainstream movies.

Brawl in Cell Block 99 amps up the violence with Vince Vaughn, who puts aside his amiable man-child roles for a rough-hewn character.

He sells the role well as Bradley Thomas, a stoic morally ambiguous character who’s a pacifist but could break your arm like a chicken wing when necessary. Building on a physical transformation with a bald tattooed head and a fitter figure, Vaughn turns the role into his own as a slightly mischievous ironic B-movie anti-hero. It’s a monotonous delivery that doesn’t require much, but he fits. The rest of the cast also does well, and Don Johnson seems to be having fun.

Likewise the script also commits to its purpose as a grindhouse flick. Once Thomas gets into prison, the movie picks up in unpredictable ways. There’s a nifty plot twist here that elevates it from your typical prison movie. Thomas needs to kill someone, but it turns out that this is just a means to a totally different purpose.

The action choreography is blunt and the violence is matter-of-fact. There’s no flair, flashy editing nor musical score either. The movie uses the ironic casting of Vince Vaughn as a special effect. His bone-crushing and limb-bending action sequences turn into entertaining slapstick comedy that despite its 80’s practical effects, it still works.

Zahler shoots his scenes in medium shots and long takes, which can make the audience feel like they’re tagging along Thomas at a safe distance as he succumbs himself to increasing levels of violence.

That’s pretty much it. Brawl in Cell Block 99 is a one-note prolonged action movie.

Despite a simplistic story, the movie clocks in at more than 2 hours. It’s an unnecessary slow burn especially considering that there’s no depth to the story and characters. The movie merely propels Thomas into a contrived series of battles against forgettable villains. Even a brawny Asian dude’s martial arts moves is no match for Thomas straightforward wince-inducing violence.

Still, it can be said that Brawl in Cell Block 99 does what it’s supposed to do and Zahler tweaks the formula enough to deliver a different kind of pulpy movie. It’s an entertaining enough B-movie flick with smart casting.