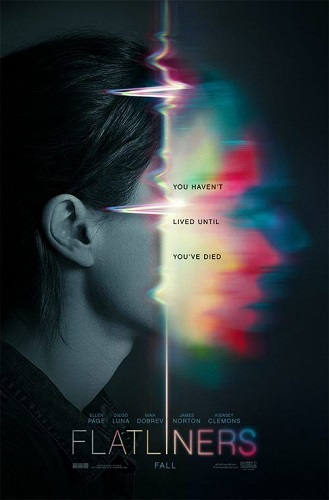 No thanks to its cardboard characters, generic horror elements, and a dull indecisive plot, Flatliners is a brain dead clone of a movie that didn’t need to be resuscitated.

Five medical students, obsessed by the mystery of what lies beyond the confines of life, embark on a daring and dangerous experiment: by stopping their hearts for short periods of time, each triggers a near-death experience – giving them a firsthand account of the afterlife. But as their experiments become increasingly dangerous, they are each haunted by the sins of their pasts, brought on by the paranormal consequences of trespassing to the other side. 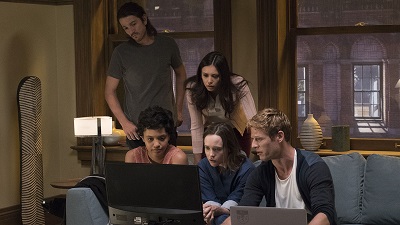 Since Hollywood’s M.O. is taking advantage of all grown-up millennials who now have disposable incomes, here we are again with another remake. Flatliners intends to be something different though, as one of its original cast members insist that it’s actually a sequel.

Flatliners does have a group of rising actors, similar to the original. The cast do their best to sell this movie with what they’re given. Unfortunately no matter what emotional heft Ellen Page and co. try to inject into the plot, the movie ploddingly lives up to its title.

You have a group of stereotypical characters – the wonderkid, the overachiever, the silent hero, the playboy, and the underdog. We know little about them because the plot is too busy trying to be cool to give them any shade of characterization.

The bigger problem is that Flatliners can’t decide what flatlining is supposed to be, and by extension, what the movie wants to be. It starts as some kind of addicting pseudoscience and then hints at being a psychological horror. These two prove to be too difficult for this low-aiming movie that makes no attempt to improve upon its source material, so it did a cop-out with supernatural karmic justice.

None of these elements bring anything interesting to the table. You’re given a mix of young people behaving badly shenanigans and redundant generic jumpscares. The flatlining scenes aren’t even interestingly trippy or mysteriously intriguing dreamscapes, just vivid but forgettable imagery.

When the doctors finally get around to do something and the climax finishes with the final atonement, nothing matters because you aren’t invested in any of them or have anything to suspend your disbelief.

Whether its supposed to be a remake or a sequel, Flatliners has nothing to offer save for its attractive cast of talented actors who get haplessly involved in a mediocre blockbuster.

The movie does have an interesting idea at the core. If it had committed to its pseudoscience perhaps a serviceable distraction would have emerged. The obvious would be a film about well-intentioned science in the hands of misguided people. A familiar narrative, combined with enough distracting visuals, can make Flatliners serve its purpose. Nobody’s looking for a masterpiece here just a popcorn movie.

Unfortunately, this sequel is only a brain dead clone of a movie that didn’t need to be resuscitated.