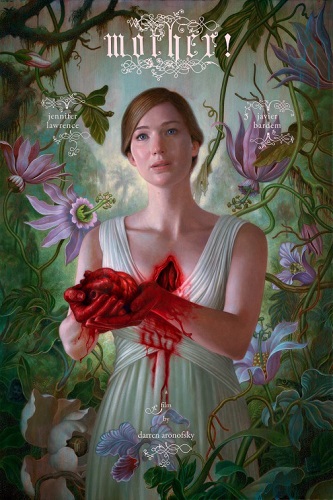 Mother! is an intriguing cautionary tale backed by solid performances and deft filmmaking, but whatever allegorical tale its supposed to express is buried underneath cartoonish excess that makes this supposedly symbolic movie assaulting, rather than enlightening, to the senses.

A couple’s relationship is tested when uninvited guests arrive at their home, disrupting their tranquil existence.

In a rare move by a big studio, Paramount decided to sell Mother! as a mainstream movie instead of shopping it around film festivals, where it would have a more open-minded and patient audience. Nonetheless, the movie garnered enough buzz that it used negative reviews as part of its marketing.

Mother! starts intriguing enough thanks to consistent and deft technical choices behind the camera. Measured cinematography, atmospheric sound design, evolving color palette, and a 16mm film stock create a mysterious claustrophobic mood that later on paints a grim anarchy. The camera closely follows Mother throughout and the visuals change as the plot unfolds through her eyes.

The performances here are great, with Michelle Pfeiffer stealing every scene she’s in. Even when things get utterly ridiculous, Jennifer Lawrence manages to make the scenes grounded with her performance.

The movie definitely has something to say using biblical references, but its buried underneath a hodgepodge of political and theological imagery mixed with what I can’t help think as personal anecdotes from Aronofsky’s life as a filmmaker (mother! can easily be a case against marrying a creative, showing the excess baggage that can weigh down the relationship – ego and fame). Everything devolves into cartoonish anarchy and theater-of-the-absurd horror, with every portrayal of human depravity that the director can think of including terrorism, celebrity worship, tribalism and a puzzling cameo by Kristen Wiig as a psychopath that mother! becomes more hilarious than it is terrifying. Within an hour, the house turns into a refuge for strangers to a post-funeral turned frat party to a dystopian battlefield of a cultish horde.

The names of the casts are a big clue to what this movie is really about, but that’s easy to miss as the movie piles on bigger and better ways to punish Mother through the narcissistic chauvinism of Him. He treats her as nothing more than a prop, while she desperately tries to hold up a crumbling marriage by fixing an empty nest.

In fairness, Aronofsky does commit to the insanity of this movie. It will test your patience, and unsurprisingly the average cinemagoer will just be bored and confused as to what the fuck mother! is supposed to be about. There are ways to portray the selfishness of mankind and destruction of mother earth without resorting to an assault of the senses, but you can’t deny that mother! will lead to an interesting after movie dinner discussion.

Him is God and Mother is mother Earth.The Man is Adam and his wife Woman is Eve. Their kids are Cain and Abel. When their family comes and the guests destroy the house, this refers to the “great flood”. Mother earth cleans up after the first apocalypse and then more people come. They idolize God and his scriptures and fight over him and his possessions. Mother earth’s home gets destroyed in the process. The baby is God’s creation, Jesus, who dies for mankind. He begs mother earth to forgive them. She lashes out instead and destroys everything with fire and brimstone, then God starts it all over again.