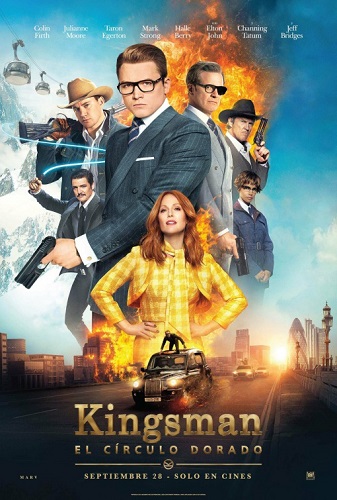 Kingsman: The Golden Circle is a bland bloated rehash that only emphasizes the overrated appeal of the original – recycled Bond gags and juvenile spy shenanigans branded as “edgy satire”.

With their headquarters destroyed and the world held hostage, Kingsman discovers an allied spy organization in the US called Statesman in an effort to continue its mission. In a new adventure that tests their agents’ strength and wits to the limit, these two elite secret organizations band together to defeat a ruthless common enemy, in order to save the world. 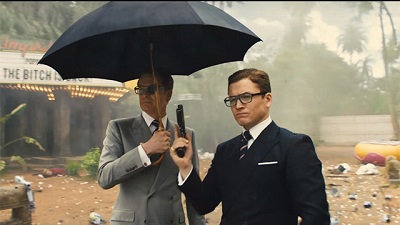 Kingsman, banking off of the ridiculousness and now seriousness of the Bond movies, is back with a sequel after delivering a blockbuster hit pastiche of the spy genre.

Kingsman: The Golden Circle offers a double dose of everything that viewers loved from the Secret Service  – more style, more spies, and a more ridiculous villain.

If you’re a fan of the original, this double heaping of fan service is a delight. It even resurrects a fan favorite with a ridiculous excuse that guarantees anyone can come back from the dead.

For the rest of the people who are not amused by its recycled Bond gags and juvenile in-your-face objectification, there are just more reasons to not like this franchise.

The sequel basically rehashes the plot of the original and as if to compensate for running out of ideas, the script is padded with subplots that bloat an already all-too-familiar movie.

The new players – Statesman – are forgettable. They’re merely used to recycle the novelty of secret organizations that made the original amusing, as well as a plot device for Kingsman.  Jeff Bridges probably spent less than a day on set. Channing Tatum has a glorified cameo. Pedro Pascal fills in the standard foreign bad guy with an accent trope.

The movie replicates the flashy frenetic action sequences of the first, but its CGI cartoonish violence and overuse of green screen prevents it from getting any close to the iconic church brawl.

The movie creates a new version of Richmond Valentine, switching from an environmentalist to a drug trafficker. Julianne Moore plays Poppy, a less funny version of Karen from Will and Grace. Her plan makes little sense and can still be thwarted with a single button. Of course, she has a mechanically-modded sidekick. Elton John is here, but overstays his welcome as his cameo gets more cringey every moment he appears.

Comparisons aside, the Golden Circle doesn’t offer much either. Combine a derivative spy parody, a bland romance injected to romanticize an unnecessary vagina scene, heavy-handed politics, caricatures, and cartoonish action, you have an overlong cranked up version of a 15 year old’s concept of “edgy satire”.

Kingsman: The Golden Circle is a bland and bloated sequel that emphasizes what’s wrong in the Secret Service, which doesn’t offer much already in the first place. If this becomes a trilogy, we might as well see a Chinese secret organization with Kung Fu spies (or a Japanese one with ninja agents) and a big pharma villain.