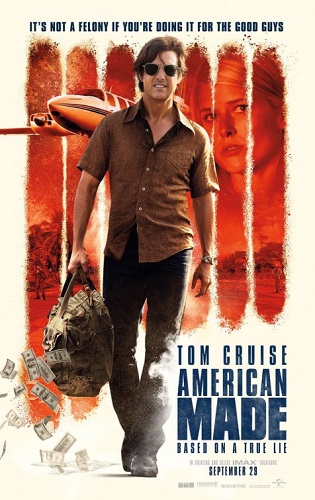 Unless you’re looking for a standard issue Tom Cruise showcase, American Made is a monotonous, forgettable and sterile true-crime comedy thriller with uninvolving characters.

A pilot lands work for the CIA and as a drug runner in the deep south during the 1980’s. 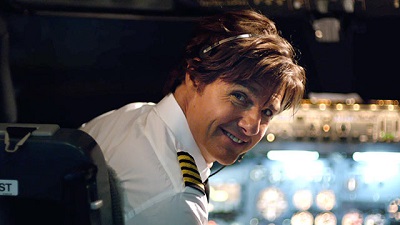 There are movie stars. Then there are megastars. American Made makes a good case for the appeal of Tom Cruise, but doesn’t go beyond that to liven up this crime thriller that promises to be a story of debauchery and the American Dream.

American Made does manage to condense the derring-do of the enterprising Barry Seal, a pilot turned drug smuggler and deliveryman of choice by the Medellin Cartel and the CIA. The plot is breezy and engaging enough as airborne antics and escalating shenanigans ensue, thanks mostly to Cruise’s energy.

Director Doug Liman manages to combine geopolitics with crime logistics without being convoluted. Taking cinematographer César Charlone on board, the movie gets the needed agitation from the roving camerawork and the perspiring unglamorous part of the job from the fitting color palette.

Tom Cruise, just like probably the best used car salesman you’ve ever met, sells this fast and loose biographical crime film well enough that you won’t find yourself Googling for facts. The role is a perfect fit in the actor’s wheelhouse, evolving his iconic role as an ace flyboy into a likeable rogue.

As much as the movie benefits from his presence, it’s also its biggest weakness. American Made is saddled by the fact that it’s really just another Tom Cruise showcase (flies a plane, gets the girl, do his stunts), preventing it from delivering a compelling rise and fall of its amoral deliveryman.

Barry Seal winks and smiles his way into lucrative deals and out of trouble. Unlike Wolf of Wall Street where we find Jordan Belfort crawling on the floor after taking an ill-advised hit of an old drug (and spawning memes), American Made doesn’t commit to the excess of its story as if its afraid to stain Cruise’ clean cut persona. Barry Seal does nothing more than take tequila shots. This turns a lighthearted entertaining movie for a Tom Cruise fan into a monotonous true-crime thriller with little comedy and no tension for everybody else.

The rest of the cast have little to do (none of them looks like they’re having fun either) as they get thrown into a revolving door of figures. Sarah Wright gets the thankless role of being Tom Cruise’s wife. Even Barry Seal himself is a caricature with vague motivations who gets swept in and coasts through a string of events, cut now and then by a videotaped confession instead of a voice over. The movie wants to tell us that its all for his family with an enabling wife but this is underwritten.

Tom Cruise manages to sell this formulaic movie through his toothy smile and charm. If you’re a fan and want a distraction until the new Mission Impossible, you’ll find something to watch. However if you’re looking for more than just another Cruise star vehicle, it’s best to watch Goodfellas again.